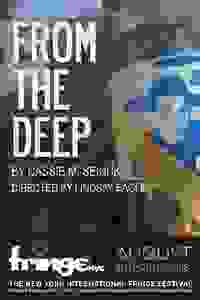 View in admin
From the Deep (FringeNYC)
NYC: East Village
89
Score it Scored!

From the Deep (FringeNYC) NYC Reviews and Tickets

Part of FringeNYC: Fates intertwine in a new dimension, beyond space and time. Israeli POW, Ilan, believes his freedom is nearly in sight. Across continents, abductee, Andrew, awaits his captor’s design. As time ticks away, they must learn to survive or disappear forever.

FROM THE ARTIST:
When Andrew, a missing BU Grad Student, arrives in the surreal room of the missing, Ilan, an Israeli POW of five years, must convince Andrew to play the games, keep his mind active, and face the truth of his captivity before they both go missing forever. From The Deep explores the question: where do we go when we’re in captivity, and what do we do to survive?

Semi-finalist for the nuVoices Play Festival at Actor’s Theatre of Charlotte.

Semi-finalist for the Global Age Project 2014 at the Aurora Theatre in Berkeley CA.

This play is currently under development with Interim Writers and The Accomplice Writers' Group. It was developed at Lesley University MFA Writing for Stage and Screen, mentored by Jami Brandli and Kate Snodgrass.

Reading of the first scene of this play was read May 5th, 2013, with Interim Writers at The Democracy Center in Cambridge MA. Directed by Lindsay Eagle. Featuring: Charles Linshaw*

*The show contains Jewish and Israeli content as it is inspired by the real life events and capture of Gilad Shalit, an Israeli POW. It also delves into issues of identity.

See it if only for Linshaw's winning performance. Profound look at how loss of freedom strengthens or breaks human spirit. Fringe at its best!

Don't see it if you only like musicals..or can't face the harsh realities of the world of a POW. Worth seeing just for the acting & the strong script.

See it if You would be inspired by the story of a soldier imprisoned for 5 years and how he continued to believe his life had meaning. I learned a lot

Don't see it if You are prejudiced against Israel. It is a universal story, though. Also, an intermission in a FringeNYC show is asking a lot.

See it if you like idea plays that touch on political and social issues surrounding prisoners and imprisonment (both literally and metaphorically).

Don't see it if a slower-paced drama and subtlety bores you.

See it if You seek creative, richly imaginative, stunnigly well acted, original drama that is both intellectually stimulating & emotionally involving

Don't see it if you prefer to avoid a discomforting immersion into pain & fear. Still author Cassie Seinuk's brilliance demands and rewards our attention.

See it if Suspense, riveting...

Don't see it if Nothing!

See it if you like to think about life. this show puts you into someoen elses head and lets you see what they think of.

Don't see it if Your uncomfortable with situations with violence as an underlying theme.

See it if You want to be moved. Strong script! See if you are looking for strong acting, a complicated, but inspiring story, and a stunning design!

Don't see it if You want a show with a very positive outlook. this show is dark

"Cassie M. Seinuk’s absorbing 'From the Deep' spends two hours exploring the interplay between Israeli soldier Ilan and young American Andrew...There’s more than a touch of looming, Pinteresque menace, but the tension lags as the play goes on; Seinuk should probably leave more to the imagination. But Lindsay Eagle’s production doesn’t let the mood overwhelm the characters or the actors: Linshaw and especially Marcus reach admirable depths."
Read more

“The themes of how we survive different kinds of violence are explored with a specificity and maturity that impressed me, especially coming from a young playwright. I only wish the rest of the play had lived up to its premise...It does a truly great job of bringing to life the complexities and rules of the imagined world Seinuk has created...I’m hopeful that my reservations about this play are simply due to typical young-writer problems, and I’m eager to see what Seinuk writes next.”
Read more

"An intriguing new work that examines many facets of terror and loss of freedom. Under the steady directorial hand of Lindsay Eagle, two actors reveal multiple layers of themselves as their time of incarceration together lengthens…Both actors are superb in portraying the terror and boredom of indeterminate incarceration…A provocative and well-conceived play."
Read more

"A powerfully disturbing premiere…Seinuk makes her characters' respective fortunes very involving, and director Lindsay Eagle sharply paces their interactions as well as their personal struggles. Charles Linshaw as Ilan and Jeff Marcus as Andrew are remarkably affecting…Seinuk has dedicated her play in memory of her grandfather 'who taught me to always go from strength to strength.' The viscerally probing 'From the Deep' more than lives up to that teaching in a must-see premiere."
Read more

"Seldom has this reviewer seen a play set in a parallel universe, created entirely from the playwright’s imagination, transcend the genre of science fiction or the theater of the absurd. But like the best of Harold Pinter, Seinuk and her cast and crew of this production have created a riveting theatrical experience. The audience not only clutches their seats to find out the final outcome of the two trapped men but also hangs onto their every sentence of dialogue."
Read more