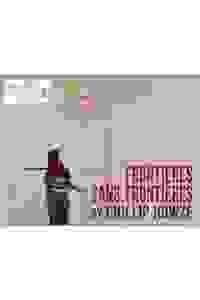 The Bushwick Starr presents a new play about borders, friendships, and the challenges of reinventing oneself in a world that seeks to limit and delineate.

At the bombed-out corner of a country that feels both foreign and familiar, three orphaned, displaced youths have built a simple life out of recreation and mischief making. But their existence is rocked as a parade of immodest strangers slowly invade their homestead offering gifts of knowledge, medicine, art, and commerce. As long-held values are upended and the lure of escape blurs their beliefs, life and landscape mutate into a grotesquery of charity exploitation that threaten their relationships and humanity.

See it if You are up for a creative and novel look at local culture versus colonizers.

Don't see it if You might be put off by something a bit too on the nose and too sure of it's own importance.

See it if You like truly innovative small theater. A sharp-tongued satire of NGO efforts in Africa, dressed up in a clown suit and a cowboy hat

See it if you want to see young, multi-gifted actors taking risks in creating unusual characters in a politically edgy setting

Don't see it if you expect to be spoon-fed your theatrical experiences. be prepared to be surprised.

See it if you are politically engaged, enjoy laughing, spectacle, and surprise. And don't mind the trip to Bushwick.

Don't see it if you want something "well-made" and easy to swallow. Read more

See it if you're down for a smart, engaging message about cultures and their wealth and perceived rank.

Don't see it if you're using your theater-going experiences as escapism right now. Read more

See it if LOVED IT! FUNNY SMART SCARY BEAUTIFUL EVERYTHING !! I was so profoundly moved by this.

“An intelligent, unruly and intermittently wonderful play…Mr. Wills has demonstrated a willingness to indulge scripted overgrowth that other directors might insist on trimming. The same is true in ‘Frontières,’ whose absurdity doesn’t always register the way it needs to, while its message can be too on the nose, its dialogue too garrulous. The ending would land harder if it didn’t stretch on so long. Yet there is much beauty in this abundance, and something deeply unsettling, too.”
Read more

“Howze's exciting piece is actually a savage burlesque, a clear-eyed bouffon treatment of war…Dustin Wills directs an incredible cast. Leslie, Winter and Fernandez are crackerjack commedia performers, and Ramos should win a prize for this…In the 'Frontières’ final 15 minutes...a long monologue slows the pace to a crawl, but more importantly, it also dims the show’s brilliance...The play is simply too good to conclude this way."
Read more