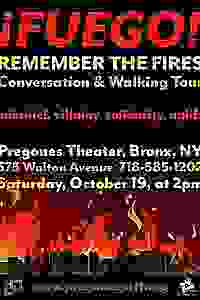 Join us for a close-up on the creative development of a new ensemble musical.

As part of its development of forthcoming ensemble musical "TORCHED! The Mostly True Story Behind The South Bronx Fires," Pregones/PRTT, in partnership with We Stay/Nos Quedamos, invites local residents, theater folks, and history buffs of all stripes to a candid conversation and first walking tour about who, what, and why the Bronx burned. Participants will gain fresh insight into the productive intersection of history, community, and theater-making. Together, we will sort through testimony of persons who lived through the devastation to tell their own stories, historic documents of the New York Fire Dept. Engine Co. 82—whose members repeatedly came to the rescue as first-responders, and wildly divergent accounts of mischief, villainy, solidarity, and uplift.