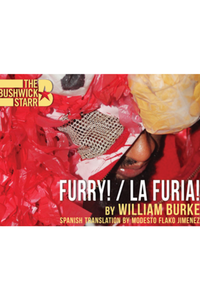 The Bushwick Starr presents the story of a street Elmo, who rises to power using 'The Art of War,' an army of Elmos, and his deepest and most violent self. Primarily in Spanish with English supertitles.

In a reworking of his 2013 play for one actor and a dirty "Sesame Street" Army, playwright and director William Burke joins forces with Modesto "Flako" Jimenez and the Brooklyn Gypsies Collective in this new Spanish/Spanglish/human translation of 'Furry! /LA Furia!' In order to care for his ailing son, a man dressed in his street Elmo best attempts take over the area of 42nd to 46th streets. Naked Cowboy beware. When Elmo Close...Elmo appear Far. The army gathers.

"William Burke’s fractured, meandering monologue is a sometimes fascinating, more often confusingly indulgent trip…It’s a grotesque, unsettling vision…While the script is not making fun of those working in costume, it doesn’t explore what pushed them into the jobs, either. At a recent performance the audience giggled uneasily; running out screaming would have been just as valid a response."
Read more