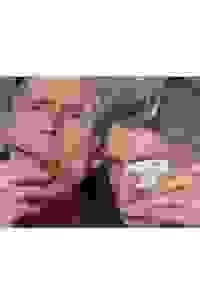 'Fusiform Gyrus – A Septet for Two Scientists and Five Horns' celebrates the resilience of friendship, the power of music to make us feel like anything can happen, and the rigorous tradition of scientific discovery in a world where scientific truth is often challenged.
Read more Show less

See it if Playful friendship has its ups and downs but mostly just fun. Clever birthday riddle for the audience. Creative music.

Don't see it if Half performance art, half comedic play. Not a traditional narrative. Bogs down a little at times but then out comes something unexpected.

See it if You like experimental theatre or brass bands.

Don't see it if You need a play where everything is explained to you or you don't do well with noise. Loud instruments in small space. Read more

See it if You are open to a group known for original and clever productions. Always relevant in a subtle way. The brass add a whole set of characters.

Don't see it if You are a philistine; be adventurous; try it for thought-provoking entertainment that works. I feared so much brass, but not overpowering.

See it if if you're open minded and ready to see the unexpected.

Don't see it if if you like predictable theater.

See it if you want to experience an innovative mix of science & theater, of play & music, or are concerned with how human knowledge is passed on.

Don't see it if you are looking for a play that is a succession of recognizable, real-life situations. Read more

"A thought-provoking blend of music, science, and human nature...Their eccentricity and rapid fire dialogue, as well as the play's repetitive pattern, recalls a Stoppard play influenced by Sondheim’s use of musical phrases and Dada poetry. Despite the doctoral-level vocabulary and highly intellectual discussions, the plot is relatively simple...In an age where the validity of science is constantly threatened by ignorance in power, 'Fusiform Gyrus' is certainly a breath of fresh, optimistic air."
Read more

"A production that is imaginatively staged...Performances by Nelis and Zimet are proof that veterans of the form can make a meal out of even thinly drawn characters, introducing the audience to worlds that are not on the page...Maddow has constructed a risky work, exemplary of the history and mission of 'The Talking Band.' Luckily, she has a director like Heyman at her side who handles the challenge with remarkable skill and innovation."
Read more

"It’s a reckless and even fun adventure...A meditation on life, death, and everything in between...Maddow’s writing is erudite but never dry. It has a cyclical form that, at times, deconstructs ideas and builds on them so that a dense idea is picked apart like a thread...The many absurd and hilarious moments in the play don’t upstage the deeper reflections...A magic carpet ride of intellectual discovery."
Read more

"Glories in its details and takes its time getting to its destination...Nelis and Zimet are each splendid actors, but it's when they engage with one another that the play comes alive. Their energy is infectious...Politically timely, but never feels like it's lecturing the audience or pushing a political agenda...Some audiences may not be easily won over...However, those who are willing to relax and absorb the sights and sounds around them...are in for an evening of joy and insight."
Read more