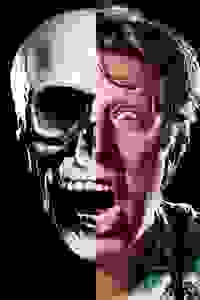 Gary has decided he will perform all the parts in Shakespeare's 'Hamlet' in order to prove that he still has "the chops." Switching between beat poet narrator, puppeteer, musical theatre singer, horror film director, and "great" actor, Gary Busey (as imagined by David Carl) plays each scene in the style he feels appropriate. A mix of high- and low-brow comedy, 'David Carl’s Celebrity One-Man Hamlet' celebrates Shakespeare's play by proving it is still relevant, applicable, and moving in the jaded, celebrity-crazy, meme-obsessed world we live in.

See it if you know the mannerisms of Gary Busey, & enjoy comedy directed to the audience (aka intense eye contact).

Don't see it if if you aren't familiar with Busey & don't enjoy comedy parodies. Also, don't sit in the first few rows as the actor spits a lot.

See it if you know Hamlet and want to see it thru the eyes of crazy persona Busey. I did by the end however, desire more Busey and less Hamlet.

Don't see it if you don't want to be out late (it's a late show), you want something with bells and whistles. Here's to a bigger prop budget next time!

Don't see it if You don't like Shakespeare out Gary Busey. If you don't know who Gary Busey is. If you've never seen it read Hamlet.

See it if You like truly original work, really good solo performers, and a little improv.

Don't see it if You don't think people should mess around with Shakespeare.

See it if you're interested watching the long-lost (but talented!) love child of Gary Busey and Napoleon Dynamite perform Hamlet as a one man show.

Don't see it if you're truly wanting/expecting to see a traditionally staged and acted version of Shakespeare's Hamlet.

See it if you like Hamlet or Gary Busey or both.

Don't see it if you want the story of Hamlet

See it if You want to laugh along with a great improv actor and his take on Gary Busey and Hamlet.

See it if You like one man shows with a stand-up comic flare.

"It’s a deliciously deranged performance, putting across the 'Hamlet' story but also sampling Mr. Busey’s film roles and personal grievances...Mr. Carl, who bears a resemblance to a young Mr. Busey, is always in complete control as he races through this out-of-control performance...He and the director, Michole Biancosino, know just how far to let things run off the rails before bringing Mr. Carl back on point by having him deliver some actual Shakespeare, which he does trippingly."
Read more

"Just see it—it’s a freaking good time...David Carl is a snarling, hillarious maniac. He keeps Busey intense and larger than life, but never over the top. Carl’s timing is spot-on, relentless, and never overindulgent. David Carl finds gritty soul and howling truth...There are moments that are breathlessly hilarious...The ride is just a ton of fun...If you want to shamelessly laugh your brains out, grab a ticket to 'Gary Busey's One-Man Hamlet' and enjoy the ride!"
Read more

"As much stupid fun as its title suggests. With his death-mask grimace and penchant for New Agey acronyms, the barking-mad Busey is here to prove his 'chops' by playing all roles in the classic tragedy...For what is essentially a stunt, the piece is neatly crafted and packed with running gags. The high point might be when Carl stages the fight between Hamlet and Laertes in Ophelia's grave as a bloody hand-to-hand brawl between the live actor and a projected video. It’s crazy hilarious."
Read more

"Judging by the audience reaction, Carl has a sizable fan base. It’s well-deserved, but even more impressive than his Busey is his ability to return to the text after all of the moments where he goes off script. My only criticism is that, given all of the references in the play, an annotated guide would be handy. But whether you’re a first-timer at the fest like me or a seasoned veteran, you should not miss this inspired entry."
Read more

"David Carl’s embodiment of the Gary Busey persona is surprisingly also rounded out with some endearing qualities. Carl keeps Busey human, allowing the audience to get led into 'Hamlet' by someone as crazy as he...Carl is always able to return to the melody and in his hands, Shakespeare’s language sings...Carl does sacrifice the emotional weight of the work...Using a real, vulnerable moment could have undercut the madcap tone of the play, lending it more dimension."
Read more

"The writing of the piece is near perfection. With Busey-faced puppets representing characters to the 'Hair' version of 'What a Piece of Work is Man' to the final fight where he battles himself on screen, the bits are what make this abridged version of 'Hamlet' a success...Where Carl struggles is giving Busey the ability to play the characters...It's a struggle that may be on the bottom of the priority list with everything else so great and fine-tuned."
Read more

"It's a brilliant act of mimicry, with Carl embodying the exaggerated persona of a man over 40 years his senior with practised ease...It's a surprisingly close working of the play, as ostensibly each act and scene is performed to some extent. Although with some notable moments of hilarious adaptation...Bafflingly bizarre and pant-soilingly hysterical...this is a show that may seem like a clash of ideas, but Shakespeare has never met Hollywood this entertainingly before."
Read more

"Carl is an energetic performer who bears a good deal more than a passing resemblance to Busey in his prime but it is a big ask to watch him rattle through the entire plot of 'Hamlet' with the volume cranked to 11 and the point nowhere to be seen...There are a few good lines, and an awesome sequence in which Carl fights with himself with the aid of a self-shot video projection, but this is largely just frat-boy fluff. A single, almost-decent joke stretched out beyond its capabilities."
Read more