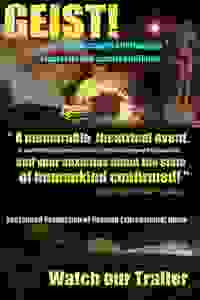 Horizon Theatre Rep presents a mystery about a group of soldiers caught in an eerie limbo, who perform short plays to pass the time.

During the waning days of World War I, a platoon of soldiers vanished without a trace. But tapes of short plays they enacted have recently been discovered. 'Geist!' documents these short plays, read and performed at a bombed-out church by soldiers waiting for their next orders. The production includes 'Sancta Susanna' (1911) by August Stramm, 'The Guardian of the Tomb' (1916) by Franz Kafka. 'The Transfiguration. 3rd station' (1919) by Ernst Toller, 'Ithaka' (1914) by Gottfried Benn, and 'Crucifixion' (1920) by Lothar Schreyer.

See it if You need a good nap.

See it if Want to know about history

Don't see it if need to be worked on

See it if you want to waste almost 2 hours of your time and walk out thinking what is this show about..

Don't see it if You are looking for a good (or even mediocre) show to see. Also directors shouldn't be actors, especially when they can do neither.

"Never once was the location, time, or reason for these soldiers being in what one can only assume was a bunker in WWI spoken of. Instead they literally went from story to story and it was hard to follow…The ongoing theme with 'Geist' is that the idea was there, but the execution was not. Overall, 'Geist' was not something to see if you like plays that have logical explanations and clear plot points."
Read more