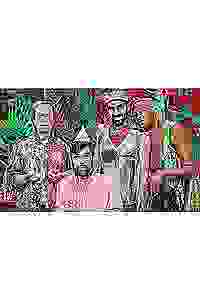 Expressionistic and experimental, the narrative of this new work begins with a spark of energy triggering life on the planet.  More…

A cluster of single celled organisms develop and evolve into clusters of pre-humans. Science and mythology merge to create an origin narrative. GENERATOR climaxes in a lyrical expression of language sung by the African spider god of stories, Anansi.

Don't see it if you want to see a play with a clear plot & recognizable characters.

Also For the first few minutes of “Generator” I was afraid this might be a 1960s throwback: Let’s invent a ritual, kids! Glad I was mistaken. What it is: A multi-media sensorium complete with a dense instrumental & vocal soundtrack performed by a band; film on three large screens (mostly abstract animation); a roaming, costume-changing reader of text; a chorus of performers, moving mostly as a group, often in furry garb & behaving first like a pack of rudimentary (but evolving) animals, then a tribe of rudimentary (but evolving) humans. None of this is treated too seriously; this is experiment without a whiff of pretension. Several unexpectedly funny, even charming incidents occur over the piece’s 60 minutes or so. The image of a white electric guitar dangling from the rafters & twirling like a giant popsicle, enchanting some early form of homo sapiens who eventually plucks it down & explores its sonic potential will stay with me for a while.... Read more Read less

"Part art installation, part dance theater that evokes the evolution of life forms on earth. The show is accompanied by the other-worldly sounds of the band NYOBS, by video projections and even by a series of smells. billed as an AIDS allegory. The connection to AIDS escapes me,"
read more
Get Alerts Alerts On Alerts Off