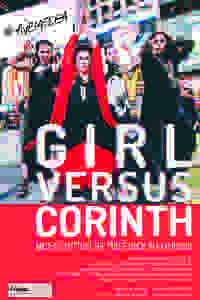 Part of FringeNYC: Medea’s back and she’s putting the pulse back in expulsion. Watch as this legendary infanticide vindicates her story through pounding electroPop and feminist Herstory. Armed with the waves of feminism, only she can dismantle the douche-bastions of the Patriarchy.

FROM THE ARTIST:
Girl Versus Corinth began it’s life in a workshop productions at Dixon Place Downtown in 2014. A revised version was presented at the Producer’s Club a few months later. In 2015, the show was produced by Monumental Theatre Company as a part of the Capital Fringe in Washington DC. Most recently, the show had a one-night-only performance at The Public Theatre’s Joe’s Pub. The New York Fringe will the first extended run of “Girl Versus Corinth” in the Big Apple.

See it if clever, electronic-music-and-estrogen-rich riffs on Medea turning into a passionate protest is for you

Don't see it if you prefer standard cabaret

See it if You're looking for a solid idea but don't mind imperfect execution. The actors keep saying things are 'too on the nose' and they're right.

Don't see it if Classics isn't your thing or preachy bothers you.

See it if You want to see an original piece performed by fantastic actresses with AMAZING vocal skills. Very funny and unique way to discuss feminism!

See it if you like foul-mouthed quippy psuedo-feminist writing and face belting.

Don't see it if you're looking for original ideas and fresh perspectives.

See it if You like a modern take on a classic story. Very entertaining and funny.

Don't see it if You don't like the above.

See it if You enjoy fresh and exciting pop music and an important and updated take on Medea. The performers are superb and the writing is excellent.

Don't see it if You dislike new interpretations of classics or socially relevant pieces of theatre.

"A lively electro-pop opening with long narratives and a strong female vocal cast...'Girl Versus Corinth' is more a monologue-driven show with occasional singing; it needs more music to fit into the musical genre. Catie Davis's directions and stage movements are minimal...More musical numbers—perhaps as commentaries to the various plot tangents—would also help make everything more coherent and engaging."
Read more

"I enjoyed the verbose text of the historical figures. For the same reason, I found it peculiar that the show thought it necessary to explicitly identify its metaphors. Further points off for the worn-out we’re-in-a-Fringe-show-and-we-know-it and stagehand-turned-actor conventions, especially when the show could’ve stood on its own feet without relying on either...Although 'Girl Versus Corinth' doesn’t say anything new, it revamps established conventions in this electropop adaptation."
Read more

"This show is truly having an identity crisis...There are so many elements of this production that stand strong on their own but they do not quite mesh...The staging is best in the musical numbers, and the simple but powerful choreography by Jelani Alladin suits the show...They have assembled a talented batch of designers and performers for their ambitious first project. What fun to see a promising new musical in its infancy."
Read more