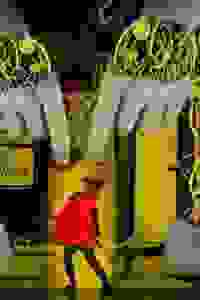 Lincoln Center Festival presents this synthesis of handmade animation, claymation, live music, and theater: a dystopian fable for the 21st century that satirically asks who—or what—is in control of our technologies?

Like a giant graphic novel burst into life, 'Golem 'invites you into a dark and fantastical tale of an extraordinary, ordinary man. In 'Golem'—which draws inspiration from both the shadowy figure of Jewish folklore as well as the early 20th-century literary work by Gustav Meyrink—humankind’s downfall comes about through a time-saving, life-simplifying gadget bought by the masses. A nightmare of the digital revolution made all the more ghoulish by the candy-colored world in which it is set. The brainchild of British performance group 1927.

See it if you enjoy seeing the boundaries of theatre pushed to new levels. A delightful and intelligent evening.

Don't see it if you only enjoy conventional theatre and do not like satire.

See it if you want to see a refreshing visual experience. If you like density on a story. If you want to hear an interesting music score.

Don't see it if you are not into avant garde animation. Lots of the show involved a big screen. Read more

See it if If you like artsy, dark, quirky, kitschy, highly stylized, funky, British comedy.

Don't see it if You never liked Monty Python or the 60's.

See it if Great integration of animation and performance; beautifully designed.

See it if You want to see some really clever sets, you like quirky, odd plays, you like dark humor and dystopian stories.

Don't see it if you prefer more conventional theater, you don't like dark humor, you want something uplifting.

See it if clown-ish, multimedia, creative use of animation, and dark humor appeal to you.

Don't see it if you don't like those things.

See it if Brilliant staging is your thing. I've never seen a more inventive use of technology/stagecraft! Like watching a Brechtian graphic novel!

Don't see it if You're turned off by heavy-handedness. They really hammer the message home.

"A visually dazzling, mind-pinching production…The integration of Mr. Barritt’s animation and the work of the cast is the show’s most singular and bewitching achievement…The characters are essentially cartoons themselves, though the cast injects them with flickers of pathos….'Golem' isn’t drawn in particularly subtle strokes. But its tart critique of a modern world increasingly homogenized has been imbued with such hallucinatory visual allure that your attention is held fast."
Read more

"Dizzily inventive and colorful...A sad-sack nobody acquires a golem...First it does his bidding, but then it takes him over, and the show becomes a heavy-handed metaphor for the pernicious rise of consumerism...The squeaky monotones of the five live actors were a deliberate contrast to the antic brilliance of the animated drawings...The piece feels long, and the music is a nattering background, but the variety and deployment of Barritt’s deceptively simple drawings are astonishing."
Read more

"Ingenious and ultimately quite moving show...An eye-and ear-filling riff on 'Der Golem'...It reminded me in places of Elmer Rice’s 'The Adding Machine,' on the one hand, and Spike Jonez’s 'Her,' on the other. I suppose my quibble is that this 'Golem' is so charming—I mean the show as much as the creature—that the ontological tale gets pretty lost. And so the general takeaway—technology bad, punk-rock good—seemed kinda banal. Still, the show is a wonder, and here I am, still thinking about it."
Read more

"Interaction between live actors, actors on screen, claymation and ‘drawn’ animation is skillfully and humorously coordinated offering endless surprise…In the guise of a fable, the eloquent Andrade has penned a sardonic morality tale ingeniously visualized by partner Barritt, played by an enlightened cast of clever cartoons, human and otherwise. Every thespian holds his/her weight in skilled mime, dialogue, and movement. A marvelously unique and entertaining evening of theater."
Read more

"'Golem' is a very stylish piece, at once tongue-in-cheek and sober…They are seasoned actors, who often capture and freeze expression and gesture to emphasize a point, or to collaborate with the animation going on behind them…Like Chaplin, and that’s saying a lot, this troupe can tackle monumental subjects with infinitely detailed and satisfying gestures and phrases…'Golem' is a tour de force, delivered with grace and bemusement."
Read more

"Beyond bringing this imaginary creature to life, the animation was mainly of use for secondary matters, almost like incidental music, bolstering transitional passages and scene-setting, although it was so imposing that everything else, including the score, was secondary. Members of the cast were perfectly coordinated but were too often reduced to narrative automatons serving the needs of Andrade's script, besides being perhaps straightjacketed by the production's intricate demands."
Read more