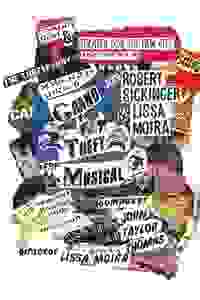 Theater for the New City presents this new musical, a silly, satirical lampoon of Broadway and all things theater, based on the obscure '90s tuner 'Platinum Taps.'

'Grand Theft Musical' is a boisterous, bawdy, bang-bang musical comedy, which openly purloins from some of the greatest examples of the genre. The cast of 17 characters includes a powerful, bisexual, vindictive columnist and his network of adorable spies; a ridiculously successful good guy Broadway producer, his gorgeous super-smart stripper girlfriend, and his envious sneaky business partner; an exceedingly dangerous mafia Don and his tap-dancing nephew; a larger-than-life Broadway director—a big bear of a man who is an unapologetic socialist; a beautiful, sensitive suicidal actress; a wide-eyed, optimistic writer composer; a stunningly insufferable superstar British couple who invite sexual intrigue; and a highly talented acid-tongued choreographer. How they relate to, deal and double-deal with, fall in and out of love and in and out of bed with each other, while singing and dancing up a storm, constitutes the plot.

Don't see it if you enjoy professional musicals with a great story, song and dance performed by quality performers.

See it if you want to waste 2 1/2 hour of your life on this Grand Theft Disaster. The only redeeming quality of the show was the tap dance routine.

Don't see it if you value your time. Read more

See it if U want to have a happy fun time. U enjoy spoofy musicals with good story, good singing & dancing, nice staging & cute costumes for budget.

Don't see it if You don't like musicals and comedies. There is really no reason to be close mined because you will deny yourself this amusing show. Read more

See it if You have nothing else to do and want to waste three hours of your life. I left at intermission because it was painful.

Don't see it if You enjoy a well written piece of art. This was a train wreck on many levels

"'Grand Theft Musical' is meant to be a paean to Broadway in the form of a spoof...There are many pointed and witty lines, some clever skits, several outstanding performances, but in the end the whole doesn’t equal the sum of its parts. The piece is much too long and needs more than tightening, it requires restructuring...It doesn’t just borrow from great shows audiences love, it steals whole songs."
Read more

“This lovely, full-length musical has something for everyone. Fans of the American songbook will enjoy all the inside jokes...Musical director Peterson keeps the show’s 24 musical numbers rolling along, and a team of choreographers provide classy tap-dancing for Gino and many swoonable moments for the ensemble. A lot of love for the genre and for the late Sickinger went into this production...You will probably want to see what all the commotion is about.”
Read more