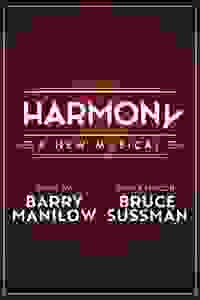 A biographical musical about The Comedian Harmonists presented by Barry Manilow and Bruce Sussman.

A true story about the internationally acclaimed musical group The Comedian Harmonists who came together at one of the most perilous moments in history. Six talented, young men, Jewish and gentile, took the world by storm in 1920s Germany. Their signature harmonious blend and unrelenting onstage antics made the group a hit, and together they sold millions of records and starred in numerous motion pictures. Industry legends Barry Manilow and Bruce Sussman revive their story in this original new musical. The cast includes Sierra Boggess (The Phantom of the Opera) and Chip Zien (Into The Woods).

See it if you like entertaining shows with top-notch singing, great choreography, good costumes and important, moving messages drawn from history.

Don't see it if you do not appreciate good music and a hard working cast giving it their all.

Don't see it if you have difficulty with Holocaust related material.

See it if Harmonists were an extremely talented a cappella group in Germany around the time of WW2. Funny & entertaining; vocal acrobatics r amazing

See it if you want to see an entertaining but moving musical about a little-remembered German music group who were majorl stars before Hitler's rise.

Don't see it if you don't like musicals or are tired of theater pieces about the Nazi era. Read more

See it if well sung show of a famous singing troupe people should know about. Well staged in a weird theater space (wish it was in a better theater).

Don't see it if was expecting the music to "be" Barry Manilow songs. This is written for the theatre.

See it if Perfectly conceived and executed. Manilow and Sussman nail it .Chip Lien and cast make it soar. Reminiscent of Kander and Ebb craftsmanship.

Don't see it if Limited run. Note: theater is freezing.

See it if well, you can't because it closed. But it was quite engrossing and nicely performed. I saw an earlier version and it is much improved.

Don't see it if you don't like musical theatre or if you aren't interesting in the period before World War II. But this is a really interesting story.

"The show is handsomely staged by Warren Carlyle (choreographer of 'The Music Man') but extremely uneven, with generic pop ballads and comedy bits juxtaposed against historical exposition and downbeat drama. This tension is best exemplified by Chip Zien ('Into the Woods'), who narrates the show in a flashback format while also making comic cameos as figures such as Marlene Dietrich and Albert Einstein."
Read more

The Comedian Harmonists were a real-life German troupe whose Olympic vocal athletics, combined with madcap comedy, made them the toast of Weimar Germany. I only need to add that three members were Jewish for you to know that this story isn't going to end well. Bruce Sussman and Barry Manilow's musical, which traces the Harmonists' rise and fall against a background of a rising Fascist threat, provides plenty of musical theatre thrills while never forgetting that the future holds disunity, exile, and death. It's a remarkable balancing act.
Read more

"If the across-the-board excellent singers and actors give marvelous voice to Manilow and Sussman's songs and dialogue, director and choreographer Warren Carlyle bring them to vivid and vibrant life. For a show that confronts one of the darkest epochs in world history, Carlyle masterfully mines humor, technicolor zaniness, and indomitable human spirit while allowing the pathos to emerge without schmaltz."
Read more

In Sussman’s book, the first act is rather generic of the backstage stories dealing with the rise of successful theater people. However, as Nazism raises its ugly head, the second act speeds up and becomes more compelling and eventful. While Manilow’s melodic music to Sussman’s heartfelt lyrics is unlike Marilow’s own repertoire, the score is very much in the Broadway theater tradition. In fact, The Sound of Music, Fiddler on the Roof, Cabaret and Merrily We Roll Along are either quoted or referred to in homage. Carlyle has given the comic numbers the best staging, but the ballads like “And What Do You See” and “Where You Go” are the loveliest.
Read more

"This is clearly a passion project for Manilow and Sussman, and for good reason. The subject matter is rich with potential. Regardless of some unevenness in the book, 'Harmony' is delightful and deeply moving. Manilow’s music is classic musical theater, with lyrical melody and tight, complex harmony. HIs score could rival that of any other new musical on Broadway."
Read more

"Despite the missteps, 'Harmony' is ultimately effective in conveying the colossal waste of talent and the monstrous injustice suffered by the characters and the whole of Europe and the world itself. The Harmonists are given dramatic and musical life by the amazing Danny Kornfeld, Sean Bell, Zal Owen, Steven Telsey, Blake Roman, and Eric Peters. Sierra Boggess and Jessie Davidson are respectively tenderly empathic and boldly conflicted as the wives of two of the members."
Read more

"That it is based on actual people and events is both a blessing and a curse. Real-life endings are rarely as satisfying as those in fables, and heroic characters must be judged for their wrong choices and missed chances. But it also means that unlikely encounters and unusual camaraderies are validated. For Sussman, truth sometimes works out to be more convenient than fiction."
Read more

'Those skeptical of the fact that the men behind 'Copacabana' could tackle serious matters should perhaps listen closely to 'Tryin’ to Get the Feeling Again' or 'Even Now,' just two examples of Manilow’s flair. ... They are the aural equivalent of 1950s melodramas by Douglas Sirk like 'All That Heaven Allows,' and, as such, not so different from the best numbers in 'Harmony,' which are crafted in a defiantly classic mold. Every time the production becomes a little wobbly, those songs steer it back to solid emotional ground."
Read more