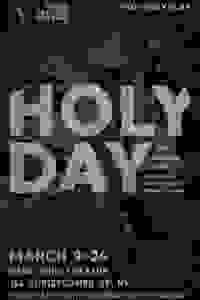 Set against the isolation of the mid-19th century Australian landscape, "Holy Day" deals with themes of race, gender and justice, exploring the conflict between new beginnings and forgotten pasts.

A traveler’s rest on the ruthless colonial frontier. A child is missing. A man is dead. A church is burned to the ground. When strangers take the law into their own hands in a land that is not their own, history will be forged and stories will be told in the name of survival.

See it if You enjoy serious shows with intense/heavy moments. Very well acted.

Don't see it if You dislike shows in a small or intimate setting or are looking for something light.

See it if you want a look at relationships of another time and country that reflect current times. Ambitious play well done by actors on a huge stage.

Don't see it if you have trouble with accents and some soft speaking done while facing all directions on a huge stage with background music at times. Read more

See it if A mystery of a burned church & stolen infant unleashes desperation & brutal violence in the harsh outback. Powerful acting.

See it if u don't mind an historical drama that's dark, grim & violent; ur interested in 19th C British colonization of Australia & the frontier wars.

Don't see it if you don't want to be confronted with frank depictions & discussions of race, rape, infanticide & survivalism. Read more

See it if you’d like to experience the stage equivalent of a 1950s historical movie epic in Panavision: gritty characters awash in primal emotions.

See it if You want to see a play that is intense at times and deals with relationships, racism, conflict and survival in Australia.

Don't see it if You want something light and fluffy. You want to miss out on a great performance by some talented actors dealing with some difficult issues. Read more

See it if You’re interested in gothic pieces that explore morality and Australia’s human history.

Don't see it if You dislike uncomfortable subject matter. You crave resolution (positive or negative)

"Why would a young, downtown theater company put on this relentlessly gruesome play...Yet, I can’t remember the last time I saw such a hateful play given such an impressive production. The eight-member cast is intense and committed...As the plot unfolds, secrets pried public, and lies exposed, we learn that nothing is as it initially appeared; everything is worse."
Read more