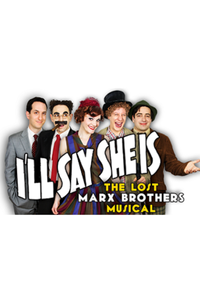 View in admin
I'll Say She Is
NYC: East Village
71
Score it Scored!

I'll Say She Is NYC Reviews and Tickets

Gimme a Thrill Productions presents a revival of the Marx Brothers' debut Broadway revue, about an heiress looking for kicks.

Before they became film legends, the Marx Brothers starred in three Broadway musicals. Two of them, 'The Cocoanuts' and 'Animal Crackers,' were adapted into movies, and are often revived onstage. But the Marx Brothers' 1924 Broadway debut, 'I'll Say She Is,' was lost to history. Drawn from multiple sources, Noah Diamond's adaptation reconstructs, refines, embellishes, and otherwise grapples with this enigmatic entry in the Marx Brothers' canon. This 2014 Fringe Festival hit is enjoying a brand-new, fully realized production.

69
Ambitious, Disappointing, Dizzying, Funny, Should have been better

See it if As I, if you have an interest in the Marx brothers

Don't see it if If you don't know who the Marx brothers were. Once the musical numbers begin, the show falls apart

See it if You're a nostalgia buff and a Marx Brothers fan.

Don't see it if You lose patience with a show that ambles along amiably.

See it if If you ever wished you could have seen the Marx Bros in person, here's your chance. Actors really channel Groucho, Chico, Harpo- a fun time!

Don't see it if You require a polished production; needed more and better sets. But the actors were obviously having a ball & the fun & joy was infectious.

See it if you like the Marx Brothers or funny, zany, slapstick, vaudevillian, shows performed by talented singers, actors, and dancsrs

Don't see it if you dis-lke the Marx Brothers or broad, repetitive, vaudeville-like skits

See it if like the Marx Brothers, want a good laugh, like musical comedies of the 20's and 30's

Don't see it if want elaborate staging or a strong plot, have Margaret Dumont's sense of humor

See it if you are a rapid Marx Bros.fan and missed this show last time around at NYMF; it's like seeing an early Marx Bros. movie live on stage, funny

Don't see it if you're not a Marx Bros. fan, don't like early musical comedies that had no real book or plot, don't like zany comedy or 1920s style songs.

See it if you love the Marx Brothers, puns, and great sight gags. Also if you want to laugh and aren't a stick-in-the-mud fuddy-duddy. :)

Don't see it if you take your theatre too seriously. Or hate puns. You won't find it funny, if you don't like them.

"An approximation of the original that is utterly convincing, and darned entertaining as well...Mr. Diamond himself plays Groucho, and he might as well be Groucho. Matt Roper’s Chico and Seth Shelden’s Harpo are also meticulous…This is a vaudeville hodgepodge at heart, with a little bit of everything thrown in...It’s all light as a feather, underscoring just how much tastes in humor have changed, even as it reminds us how brightly the Marx Brothers’ brand of lunacy once blazed."
Read more

“Amanda Sisk’s scruffy but lovable production benefits from oodles of hey-kids-let’s-put-on-a-show enthusiasm and a remarkably talented foursome as the Marxes. Noah Diamond makes for a more youthful but hilarious Groucho. Seth Shelden’s blissful Harpo plays Debussy on the harp, accompanies Chico on piano and channels the loony icon with utter sweetness. Nostalgic yet fresh, any whiff of mothball about the material is wafted away on gales of laughter.”
Read more

"I've seen several Groucho impersonators in my time and Diamond is one of the best…There's no question that they have stayed true to the loose-limbed, anything for a laugh ethos of pre-'Show Boat' Broadway...Shows like 'I'll Say She Is' depended to a certain degree on making a visual splash -- something that is beyond this production's resources. Still, the laughs never stop, and, under Sisk's pacey direction, the two-and-a-half hours breeze by."
Read more

“Unfortunately, this vaudeville-style show seems terribly dated. As directed by Amanda Sisk, the pace isn’t fast enough so that the material isn’t as funny as a Marx Brothers movie. The one liners like ‘Two decks of cards and not a brain cell between them’ aren’t very funny anymore. Styles change in humor as they do in sons. The melodies are bouncy, but the lyrics are generic twenties rhymes and rhythms of which there are better examples to be heard.”
Read more

"A plot-light but hilarious revue, equally true to its source material and engaging to contemporary audiences...The cast and production team have clearly done their research, painstakingly capturing the Brothers’ iconic personalities and distinctive comedic rhythms. Marx Brothers aficionados will appreciate the leads’ spot-on impressions...Yet, even those with little to no familiarity with the Marxes can enjoy the show’s daffy entertainment…A solidly entertaining gem."
Read more

"This show is dated, silly, overlong, but entertaining enough to warrant a visit…The sense of anarchy, that something witty and arch will emerge from the mouths of the four actors portraying the Marx Brothers, keeps this lightweight spectacle rolling along…Diamond captures the energy of the young smart-ass Groucho…He keeps the show together, quipping and improvising…Sheldon cleverly plays up the mischievous qualities of Harpo."
Read more

"'I’ll Say She Is' would certainly be a welcome addition to the seasons of theatre companies around the country and beyond…The production has many splendid moments, both comedic and musical…Chap’s arrangements here help make several of the songs infectious…Some comic bits are staged deftly, but the pacing lagged in places…Not every actor is pitch perfect...Diamond’s youthful-looking Groucho and Seth Shelden’s sweetly impish Harpo are audience favorites."
Read more

"Shelden, Roper, and Diamond are all fine replicas of the originals...If you’re a diehard Marxist, you’ll appreciate the nostalgia they inspire and will admire their impressionist skills; if you’re not, seeing them cavort in a nonsensical storyline peppered with not a single memorable song or dance over two and a half hours is an endurance test I recommend only if TCM can’t satisfy your Marxian cravings...The production...is so cheesy you may want to spread your favorite jam over it."
Read more