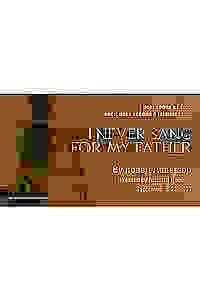 View in admin
I Never Sang For My Father
NYC: Midtown W
75
Score it Scored!

I Never Sang For My Father NYC Reviews and Tickets

This drama probes into the disquieting alienation that can exist between father and son – an estrangement that, despite the best intentions of both parties, is often deepened with age and unhealed by time.

This is the story of Gene, a widower, with an elderly mother whom he loves and an eighty-year-old father, whom he has never loved, hard as he tried. The father has been mayor of a small town in Westchester County, self-made and highly respected. Beneath these trappings, however, he is a mean, unloving and ungenerous man, who has driven his daughter away because of her marriage to a Jew and has alienated his son through his possessiveness, his selfishness and his endless reminiscences. Suddenly the mother dies, and Gene is faced with the responsibility of having the father on his hands just at a time when he wants to remarry and move to California.
Read more Show less

Don't see it if You need staging and sets, you cannot suspend disbelief when actors playing father and son are of different races Read more

See it if you believe parent-child relations are always smooth and loving, and parents should be perfect, so anything otherwise would interest you.

Don't see it if you are tired of listening to adults blame their parents for everything. Read more

"The current production by the Chain Theatre, directed by Richard Hoehler, never quite achieves a similar revelation, partly due to casting and partly due to odd creative choices made by Hoehler and his artistic staff."
Read more