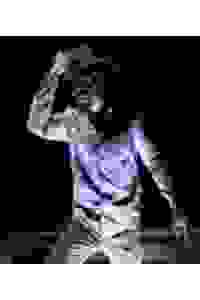 View in admin
In The Master's House There Are Many Mansions (FringeNYC)
NYC: East Village
76
Score it Scored!

Part of FringeNYC: A mortuary in the Fillmore district, San Francisco, 1976. Larry James Fletcher pays final respects to his childhood friend Tyrone, a casualty of police violence. In the chilling embrace of the embalming room he discovers who the real victim is.

See it if You like plays with music and dancing, great dancing! Mysterious, magical realism.

Don't see it if You don't like funeral homes, or death depicted as an actual character.

See it if Decent acting and the music and dancing were well-executed.

Don't see it if The music and dancing were gratuitous and distracting.

"This was an outlier: an ambitious revival in a festival dominated by new pieces...In a poetic, surreal manner, the play looks at how black men are raised and, too often, die. Despite the challenging acoustics, Singh and the Freidline successfully created a somber mood with jazz and blues instrumentals, and the tap performer Hill contributed percussive grace notes. Too bad the acting in this production was not always up to the task."
Read more

"Chilling and stunning in its simplicity…’In the Master’s House’ stays with you, but unfortunately loses some of its effect due to some unconvincing acting. Bracy and N’gaojia play their characters effectively, but in a familiar story, they need not try to sell it as hard as they sometimes do. However Hill, who serves as the show’s percussive instrument, tapping at regular intervals with an exquisite two-piece jazz ensemble, needs no words— he is expressive and brilliant."
Read more

"One of the most challenging pieces of theatre in FringeNYC 2016…‘In the Master’s House There Are Many Mansions’ raises many rich and enduring questions…Under James Vesce’s electrifying direction, the cast is uniformly brilliant and engaging. They each bring authenticity and a level of honesty to their characters that challenges the status quo and reverberates through the performance space with disquieting truthfulness...This is a play that needs to be seen."
Read more