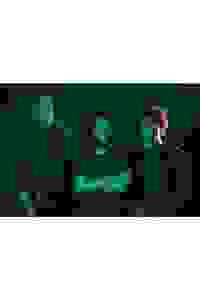 View in admin
In the Penal Colony
NYC: East Village
71
Score it Scored!

In the Penal Colony NYC Reviews and Tickets

In this new adaptation of Franz Kafka's short story, three black men convene in an unnamed penal colony, asking what it means for them to exist in the media, when observed, when consumed, when punished.

Adapted from Franz Kafka's short story of the same name, "In the Penal Colony," investigates the performance of power, patriarchy and punishment.

See it if If you want a modern work from a classic writer. Some good choreography. One hour long.

Don't see it if If you don't like the absurd to a classic writer. Deals with black prisoners and what is expected of black society.

Don't see it if you want anything that resembles a play or deals with the issues that Kafka and Hugo, before him, brilliantly explored Read more

See it if Intense in your face robotic repetitive movement and performance related to the experience of​ being a black man in America.

Don't see it if you are expecting a cohesive story with a narrative--this is an explosion of repetitive movements and intense bursts of action. Read more

See it if you are interested in a new adaptation of Kafka's short story,encompassing the Black Am experience; outstanding acting,coregraphy&athletics

Don't see it if Even if racism is not your fav.subject, there is more reason to enjoy this show as "a metaphor of society",following Theatre of the Absurd

Don't see it if you need a clear, defined narrative.

See it if you are thrilled by a powerful and raw vision, a surreal extension of the cruel treadmill young black men must endure. Tour de force acting.

Don't see it if you need clear plot lines and signposts to guide you through a story.

See it if You are interested in highly physical, political theatre that is an adaptation of a classic text

Don't see it if You have an aversion to nonlinear theatre

See it if you love black men. If you are enthralled by muscular physical technically precise choreography. great singing and acting. the cast is super

Don't see it if you can't handle the truth about the horrifying history of America's use and subjugation of black men.

"The questions Haymon raises are vitally important ones, but this may not be the right format for them…Kafka imagined a machine in which written laws tear into a person's flesh. Her version of 'In the Penal Colony' doesn't offer anything nearly as terrifying as that."
Read more

"It's debatable whether Haymon really even needed the frame of Kafka's story on which to hang her ideas. It's a somewhat uneasy matchup. Kafka's work, like Haymon's, certainly deals with power and punishment and a failure of the justice system. However, the story has a very European sensibility."
Read more