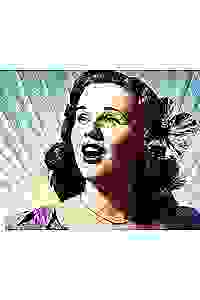 Ingenue: Deanna Durbin and the Golden Age of Hollywood

"Ingenue" tells the true story of the lifelong friendship between two classic stars of Old Hollywood. Featuring the songs: 'Someone to Care for Me', 'Molly Malone', 'Always', and 'Somewhere Over the Rainbow.' More…

Judy Garland is an icon, loved as Dorothy in Wizard of Oz. But in the 1930s, Deanna Durbin was a much bigger star. A favorite of Roosevelt, Churchill, even Mussolini, her first kiss was front page news in the New York Times. At 27, she turned her back on fame, and left the screen for a life of obscurity in France. Ingenue tells the true tale of the lifelong friendship – and rivalry – of these two great stars of Old Hollywood.

See it if you love old Hollywood. DD's story is fascinating. Limitns of solo show (converstns to the air), but kept lively. Some fun, silly songs.

Wish I Could See Them All
Syosset
50-64 | Male
671 reviews
Get Alerts Alerts On Alerts Off
83
Resonant, Informative, Intelligent, Great singing, Delightful
January 1st, 2020

See it if Solo bio of DD, a fascinating child star & celebrity from the 1940's who quit Hollywood at age 28. Excellent research & operatic vocals.

Don't see it if You don't enjoy solo biographies.

See it if you'd like some back story to the Durbin-Garland relationship, songs and careers with an excellent performer with a strong voice/personality

Don't see it if you do not appreciate hearing the golden age of Hollywood movie moguls tactics in using young talent for their own enrichment.

See it if you know nothing about Deanna Durbin. She was an American sweetheart who is slipping from public memory and deserves to be remembered.

Don't see it if you're expecting intimate details of Deanna Durbin's life. The show is more singing than gossip.

See it if You want to hear great singing. Here the story of how Deanna Durbin came to Hollywood and why she left. About Judy friendship with her.

Also She did 23 movies (with one short with Judy Garland). If you like old Hollywood go see it. Enjoy this very much.... Read more Read less

See it if you are a Deanna Durbin fan (I am) and want to learn more about the golden age of Hollywood. Lots of good history.

See it if you want to see a wonderful actress, singer, writer show what can be done to get a solo show right

Also This show, although about primarily about Deanna Durbin, provided insights into Judy Garland's career that Paper Mill's "Chasing Rainbows" literally danced around.

It has been a long time since I was as moved by a song as I was when Ms. Gall sang a "duet" with Deanna Durbin as the closing scene. "Molly Malone", sung beautifully and young Judy Garland's favorite song, here serves as a funeral dirge - mourning while celebrating a life.

The only flaw in the production was unavoidable in the performance I saw. Ms Gall's marvelous voice was hampered, especially on low notes, because of a cold/flu she (and many of us in the audience) was suffering.

See it if you are a fan of or just interested in Garland, Durban, the Golden age of Hollywood and its music/relationships among its principal players

See it if You want to see a lovely tribute to Deana Durban & back story of her relationship with rival Star Judy Garland. Beautifully sung!

Don't see it if You don’t like this period of music.

See it if You like old time reviews. I learned a lot about Deanna Durbin. Artist was very good. Songs we’re great.

Don't see it if You do not like tribute shows

See it if to hear Gall's evocation of some tunes associated w DD; this is more hommage than simulation: her voice is not the pure lyric soprano of DD

Don't see it if low-tech, solo shows w recorded backing tracks are not your thing. Despite original arrangements credited to Bennet Paster, no spontaneity

Also As is the case with most solo tribute cabarets, this is clearly a labor of love for Melanie Gall. In the absence of any biographies, she has done a lot of research on her subject. However, playing and singing the character of Deanna Durbin throughout does not give the performer a chance to share her reasons for her interest in the child star or her music, nor speculate on the costs and rewards of her precipitous exit from Hollywood for a life of reportedly contented obscurity in France. These might have been more interesting than the set-up she has chosen (no director is credited): a 1969 interview with a reporter from the NYTimes on the occasion of Garland's death to whom she recounts her youth and brief association with Garland.
It's telling that some of the most engaging moments of this brief evening came at its conclusion, when Gall opened the floor to questions about Durbin. While there's little new insight here, it's a pleasure to hear these '30s-'40s bygone hits lovingly evoked.
... Read more Read less

See it if 60min storytelling & singing from Deanna Durbin’s perspective, with reference to Judy Garland; Actor covers her cold quite well;

Don't see it if Nostalgic, nothing too Surprising; The cold does make her lower register bit coarse; Tunes feel repetitive after 30min;

Also All other characters are in soundtrack. Kudos to the actor to get the timing right.... Read more Read less

See it if You like old Hollywood story about Durbin/Garland relation, difficulty of being a young actress in Depression Era

Don't see it if You do not like one act, one woman show, old tunes, intimate theater with bare bone staging

See it if You are interested in two famous actresses (Deanna Durban and Judy Garland) of the 1930s and/or want to support a talented artist.

Don't see it if You do not like one person shows,

See it if A one-woman solo performance depicting the lives of Judy Garland and Deanna Durbin. Wonderful acting and singing make for a pleasant

Don't see it if Experience. You don't enjoy stories of the old Hollywood. Another terrific production at the Soho Playhouse

See it if You are interested in Deanna Durbin, old Hollywood, one woman shows.

Don't see it if You don’t like one woman shows with little production value.

See it if you want a delightful play mixed with a narrative history and musical songs about Deanna Durbin.

Don't see it if one woman (person) shows are not to your liking..

See it if you want to learn about the child star Deanna Durbin, her impact on the "studio system", and her friendship with Judy Garland.

Don't see it if you want an ensemble cast. This is a one woman show.

See it if you enjoy a one-woman show about Ms. Durbin...clever and fun!

Don't see it if you've no interest in the story of Deanna Durbin with musical interludes!

See it if You are interested in the lives and friendship of Deanna Durbin and Judy Garland, or if you like musicals and one woman shows.

Don't see it if You have no interest in Deanna Durbin and/or Judy Garland, dislike one woman shows, dislike musicals or prefer to see a lavish production.

Don't see it if you expect more Garland songs. Great example of inherent mistreatment of women by Hollywood.

Also Truthfully,didn't know much about Durbin credited until her demise at 91, except for correspondence with Mussolini....... Read more Read less

See it if You enjoy old world Hollywood and great singing

Also As a child I saw all the movies of Deanna Durbin. I loved her voice, her poise, her sweet, bright innocent smile.

Ms. Melanie Gall was lovely and on target with this cabaret biographical show of Edna May Durbin, a Canadian depression era prodigy who landed in Hollywood, and quickly rose to fame with her gifts of an outsized voice for her young body and a poise and elegance that filled cinemas world-wide.

She might have played an ingenue on the silver screen, but in real life she proved to be a very smart woman who walked away from all the trappings of fame, addiction and decline that killed her childhood Hollywood performer friend, Judy Garland.

That wise decision gave her the greatest gift of all: a long life (1921-2013), lived with the privacy most movie-stars rage about wanting and needing but aren't usually afforded.

Ms. Gall, a trained opera singer currently working on a Durbin biography, sang for us some of the movie star’s most famous songs. It was a truly lovely tribute.

“Ingenue: Deanna Durbin and the Golden Age of Hollywood” hasn't been reviewed by any Critics (yet!)