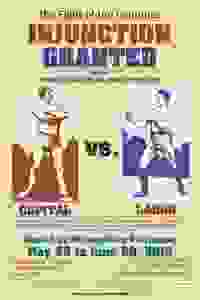 It's labor vs. capital in this circus-like living newspaper, created in 1937 by the Federal Theater Project, and presented today by The Metropolitan Playhouse.

As part of their season themed "Progress," The Metropolitan Playhouse presents a jubilant celebration of the 1930s social dramas created by the WPA. Then described by The New York Times as the play that "bludgeons capital and the courts as if the revolution were already accomplished," this production of 'Injunction Granted' will be performed with acrobats, music and clowns...as well as a special coda written just for the Metropolitan production, bringing this classic play into the twenty-first century.

"A few more gradations and a little nuance might have helped, but that doesn’t seem to have been the goal...Though far from a subtle play, it sometimes seems an urgent and unfortunately resonant one. The Metropolitan revival is perhaps more enthusiastic than it is expert, with a cast of five playing scores of roles, not always credibly."
Read more