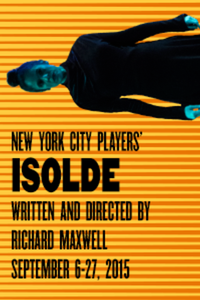 Theatre for a New Audience and New York City Players present a new play written and directed by downtown experimental auteur Richard Maxwell, an adaptation of the epic love story of Tristan and Isolde.

'Isolde' is a new American play about memory, identity, the ephemeral, and infidelity. The marriage of Patrick and Isolde appears to be happy. Patrick is the owner of a successful construction company and Isolde is a star actress. But Isolde finds herself increasingly unable to remember her lines. When she decides to build her dream house, her husband is eager to help. But the project is jeopardized by Massimo, an award-winning architect whom Isolde hires.

See it if The monotone delivery is exasperating. The ending saves the production from being a total bore. Why all the praise??? Should be experienced.

Don't see it if If you want thrilling and thought provoking theater, stay away.

See it if you are a fan of the playwright.

Don't see it if you prefer naturalistic acting or dislike minimalist sets.

See it if you appreciate moments of insight and originality within a somewhat inconclusive whole.

Don't see it if you prefer a clear narrative arc.

See it if Riff on T & I legend which is engrossing to a point. With scene/costume change to Wagner-land it fell apart for me. Actors tops, though.

Don't see it if Experimental theater is a stretch for me & this is no exception. Many empty seats, one more week. TFANA what did ya do to me?

Don't see it if you're turned off by excessive dryness

See it if You like mannered performances in a play which doesn't make sense.

Don't see it if It takes longer to get here than the running time of the lay.

See it if ...you cherish a very physical style of acting.

Don't see it if ...you are about to remodel. You will be reminded just what an ordeal it is.

See it if Richard Maxwell successfully stages a strange and riveting production. A perfect blend of common stage convention and performance art.

Don't see it if Your patience level is little to nothing- as this play ticks...very.....slowly....

"'Isolde' forces its heroine to choose between the pragmatist and the fantasist...This being a Maxwell play, the lines aren’t quite that clear cut. The cast are all veterans of New York experimental theater. Here they make us aware of the inadequacy of speech, the layers within one scream and the eloquence of longing within a silence."
Read more

"Richard Maxwell’s 'Isolde' belongs to the Mad Libs school of dramaturgy, in which random elements are fitted together to fashion something absurd. Ideally, the way the elements fit or don’t should produce sparks of emotion or at least, as in Mad Libs, peals of laughter. 'Isolde' just sits there, complacently making no sense."
Read more

"There is some energetic, bare-bottomed boinking in experimental author and director Richard Maxwell’s mostly intriguing 'Isolde.' The meditative pace and quiet create the mood and cast a spell in this work. Four terrific actors are another big plus, especially during a couple yawn-inducing stretches."
Read more

"At its best, 'Isolde' presents individuals struggling to defend their needs and viewpoints, which often they cannot actually articulate...By the same token, it is a strange, slow, often puzzling work full of pauses and aimless pontificating. The actors deliver their lines in a disconnected, flat manner, which can be off-putting."
Read more

"Maxwell has been showered with awards and critical praise for his distinctive deadpan style...But if the one-note performances lull the audience into a slumber, they're really not going to hear the words the playwright crafted...The prelude to Wagner's opera 'Tristan und Isolde' plays softly in the background, reminding us of what greater artists have done with the source material. Sadly, at Isolde, one only gets the clumsy sound of a restless audience."
Read more

"As I took my seat at TFANA, I felt well-versed in the theory of Maxwellian theatre. But nothing could have prepared me for the astonishing dullness of it in practice...Watching 'Isolde,' I felt I was trapped in an exercise in anhedonia. Never has passion felt so limp."
Read more

"To enter into the world of playwright Richard Maxwell is to forego any expectation of straightforward clarity, richly realized characterizations, or emotional connection. If you can accept these strictures, however, you will be pulled into a bare bones universe that is as compelling as any of Harold Pinter’s what-lies-beneath-the-surface works."
Read more

"'Isolde' is absorbing theater. However, you will either find it pretentious or brilliant depending on what you want from a theatrical experience...While 'Isolde' is never boring, its omissions may frustrate the theatergoer who looks for answers. Those who appreciate being challenged will find it a fascinating experience. However, it is not a concept for everyone."
Read more

"Too much of the play feels like a graduate level course in acting theory rather than a production with $85 seats...Whether or not you are fond of experimental or avant-garde theater is immaterial. Good experimental theater is, quite simply, good theater. On the other hand, failure to enrapt or capture the audience’s attention or imagination is not. Toward the end of 'Isolde' Massimo whines: 'I don’t know what’s going on!' Neither do we, Massimo. Neither do we."
Read more

"'Isolde' remains effective at probing the artifice of theater and the ways in which verbal communication can be both vividly expressive as well as woefully inadequate, but the fact remains that Maxwell's project is something of an acquired taste. Some viewers will find his philosophy dissatisfying in its opacity...Whether or not you buy what he has to offer, this new production certainly makes it hard to deny that Richard Maxwell knows what he's doing."
Read more

"The narrative unfolds in a series of loose vignettes marked by this manner of dialogue alongside certain moments that feel viscerally, immediately real. This aesthetic, for which Maxwell is heralded as a champion of experimental theater, somehow lets "a fuller, more complex sense of reality emerge." Through his bending of reality, Maxwell and his actors create characters that - even in their surreality - ooze humanity and beg empathy with the nod of a head or a carefully emphasized silence."
Read more

"It’s simply that its story, loosely based on the legend of the adulterous lovers Tristan and Isolde, best known from Wagner’s opera, while superficially interesting in that regard, failed to engage me either by its ideas, characters, dialogue, or dramaturgy. Partly, this may be owing to Mr. Maxwell’s distinctively cool directorial approach."
Read more

"'Isolde' is one of those love-it-or-hate-it plays. The combination of the ancient Irish myth of 'Tristan and Isolde' plus a modern story of infidelity and loss with a soupçon of Wagner sprinkled in, isn’t just a mash-up, it’s a mess...There are some compelling feints at deeper meaning...But then there are moments that leave you wondering if Mr. Maxwell really did just throw a bunch of dialogue lines in the air and pin them down wherever they landed."
Read more

"Ultimately, 'Isolde' proves a challenging play to watch and to understand, though the company seems to have succeeded in creating the play they wanted to make. A puzzle as much as a performance, this new play does what Theatre for a New Audience seems to do best: putting an unexpected new twist on the classics."
Read more

"With the tragic romance of 'Tristan and Isolde' as a kind of backdrop, Maxwell goes on to develop his own myth...Maxwell’s version delves into other realms, about art, identity, the walls between us, the limits of what can be expressed and of humans’ ability to connect. It’s an intoxicating swirl of ideas. If it sounds heady, the play is grounded in a timeless story."
Read more

“Smashing new work...As in many of the romantic tragicomedies of long ago, 'Isolde' forces its heroine to choose between the pragmatist and the fantasist, between reality and escape. This being a Maxwell play, the lines aren’t quite that clear cut...'Isolde' is in a lyrical vein, and the performances tremble on the brink of full, naturalistic emotion...Mr. Maxwell nails his male characters, compassionately but firmly; he knows their games and their weaknesses."
Read more

"The wry tragicomedy paints in watercolor, in pale washes that saturate your perception for hours afterward...This 'Isolde' is more Chekhovian than operatic, hot blood cooled by humor, self-mockery, sweetness, regret...Nothing is compressed performance-wise, though all play quietly. The quartet works at an incredible, precise pitch—throwing away every line but losing nothing. Richard Maxwell’s stripped-away aesthetic achieves maximum emotional effect."
Read more

View in admin
B
Jordan Shavarebi

"Affectless, monotonous, stark, and tremendously poetic. Beautiful, really...It forces the audience to be in a room with themselves and to recognize, in the characters and drama unfolding onstage, the depressingly mundane existence within this unsolvable matrix we call life. I understand how terrifying that sounds, but (just as in real life) there are moments in which you can do nothing else but laugh at it all."
Read more

"It feels incredibly mannered and stilted, not least when characters keep alternating between poetic passages and thudding banality. There are some interesting ideas here and there about the construction of buildings and memory. But that affectless delivery is just too distracting. It all ends, bewilderingly, with a scene from the medieval myth of the title, complete with tabards and swords, but with the actors still maintaining their gauche stiffness."
Read more