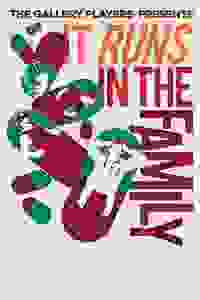 View in admin
It Runs in the Family
NYC: Brooklyn
90
Score it Scored!

It Runs in the Family NYC Reviews and Tickets

The Gallery Players presents this British farce in which an arrogant doctor fends off a paternity suit, an ex-wife, and various other lunatics so that he may deliver an important speech at an international conference.

Dr. David Mortimore is a pretentious neurologist who is about to deliver a major speech at an important medical conference. A knighthood might be in the offing, he thinks. But shortly before his scheduled appearance, his former nurse and lover shows up after '18 years and nine months' to tell him he has a son. Trying to hold both his career and his marriage together, Mortimore tumbles into a web of ever-expanding lies and outrageous acts of deception.

Don't see it if You need flashy videos to enjoy performances. This was like listening to old-time radio.

See it if You enjoy screwball comedies featuring mistaken identities. These comedies are tough to manage but the actors pulled it off brilliantly.

Don't see it if You prefer tragedies. This one features infidelities but no real punishments for the wrongdoers. Sins without consequences may not appeal.

"As long as you don't think too hard about the decisions of the characters or question the premises of the plot, 'It Runs In The Family' will take you on a joy ride full of hearty laughs, twists and turns, ins and outs, and ups and downs. With its excellent ensemble cast, I guarantee you will have a jolly good time."
Read more

"It’s such a rare and unexpected treat to attend a piece of theater that takes care of its audience so wholly as this production...The Gallery Players 'It Runs in the Family' provides more theatrical entertainment than can be found in most Broadway productions. The cast and crews' efforts are earnest and genuine and that shines throughout the evening."
Read more