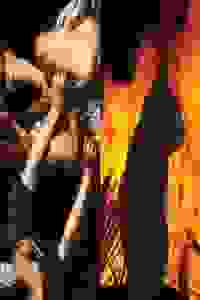 View in admin
Judith: A Parting from the Body / Vinegar Tom
NYC: Chelsea
78
Score it Scored!

Judith: A Parting from the Body / Vinegar Tom NYC Reviews and Tickets

The Potomac Theatre Project presents 'Judith,' a biblical tale of female heroism and sexuality, and 'Vinegar Tom,' a look at gender politics during a 17th century English witch hunt.

The story of Judith has inspired artists in nearly every generation. In Howard Barker's telling, the fatal encounter between Judith and Holofernes becomes a complex duel of seduction and deception and a compelling study of intense desire and the sometimes terrifying nature of love. Caryl Churchill's 'Vinegar Tom' is a haunting play with seriously subversive intent – misogyny, torture, and songs. In a village in 17th century England three women are threatened with death for the practice of witchcraft. 'Vinegar Tom' is a cabaret about hanging witches, with no witches.

See it if you like watching great actors tackle intense material.

Don't see it if you prefer action to intellectual dialogue.

"'Judith' and 'Vinegar Tom' by no means represent their respective authors at their best. Both plays bring out the lecturer in their creators; emphasized with undue strain in the likable but clumsy performance of 'Vinegar Tom...' But these productions allow New Yorkers a rare chance to encounter seldom-seen plays from two of Britain’s most inventive dramatists. And this pair of plays elucidate aspects of complex writers who use the same themes more subtly in other works. 'Judith' is the more successfully realized of the productions,"
Read more

"To truly love this, you will need to close your eyes to the occasional amateurish design element. Thank goodness PTP has chosen texts that make you wipe away sweat, even tears. 'Vinegar Tom,' in particular, blows like a strong wind; any flaws certainly seem less noticeable when you've got centuries of women-hatred gusting at you."
Read more

"'Judith' and 'Vinegar Tom' edgily translate old stories about the nasty power struggles between the sexes into contemporary contexts. As pieces of theater, they're the mental equivalent of a sweaty workout at the gym...At two hours and 40 minutes, a heavy-themed double bill like this sometimes make us wish for a bit more levity."
Read more

"This is not a double bill calculated to make new fans of Howard Barker or Caryl Churchill, however; one work is hampered by its author's mannerisms, and the other is looking rather long in the tooth, both ideologically and stylistically...'Judith' and 'Vinegar Tom' add up to a rather long and labored evening, in which the needs of drama are subordinated to each playwright's need to instruct the audience. This one is for hard-core fans of Barker and Churchill only."
Read more

"Barker’s is perhaps the more intriguing, if decidedly challenging work...Churchill uses 'Vinegar Tom' to highlight the relative powerlessness of women...All of this comes off as rather heavy-handed, and while the play may have felt like a gut punch during the 1970s, it has little to say that is new...Both of these plays are lesser works by very talented and prolific playwrights. It is the dedicated work of the solid cast and directors that make them worth the visit by admirers of Barker and Churchill."
Read more

"'Judith' provided a rough start to this ultimately enjoyable evening...That said, I would strongly recommend checking out the Potomac Theatre Project’s evening of plays to see 'Vinegar Tom.'"
Read more

"In this literate, thought-provoking work by Howard Barker, the early focus is so much on death and denial of desire there is a question of whether desire will ever manifest...Barker turns many of our preconceptions upside down—such as who is virtuous and who is vicious. The play is intelligently and sensitively directed by Richard Romagnoli."
Read more

"These are works for thinking people, for those who enjoy analyzing and seeing parallels, for those with a knowledge of and interest in history. These are not pleasant plays although they are intellectually exciting...This wrenching play must be considered Caryl Churchill’s crie du coeur."
Read more