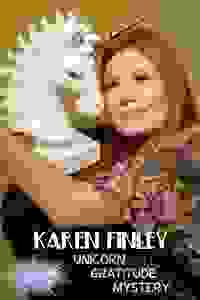 In 'Unicorn,' Finley humorously explores America's obsession with the unattainable white-horned mythical creature. Armed with a healthy dose of cynicism, 'Gratitude' finds Finley obsessing on the narcissistic tendencies that fuel contemporary gentrification. With 'Mystery,' Finley dives deep into the language, emotion, and the loss of control that can happen when we give in to our fear of the unknown.

See it if you enjoy social commentary with a whimsical bent. There are some lovely moments but not quite as many as I had hoped for.

Don't see it if you are expecting chocolate sauce.

Don't see it if You object to raunchy or political humor.

"Time has not reined in Karen Finley’s fire…Decades on, and she still has the uncanny ability to go from zero to fury in a split second…Ms. Finley can also be wickedly funny...Like the first two, the last piece makes some wild turns, touching upon the concept of blondness in Hollywood and society’s exploitation of war and veterans. The connection between all those elements may be a little fuzzy, but no matter — Ms. Finley knows anger; she also knows entertainment."
Read more

"There's plenty of breakneck obscenity, but some element of shock is gone…Yet there are other surprises here, ones that emerge out of a piece that starts as chaos and coheres as it goes along. Be ready, though, the 90 minutes contains much that is discombobulated and self-indulgent…Finley has a particularly emphatic way of making subtext into text...It's a Finley show, so she smears a lot of crap on that body—but somehow, she also seems to be clearing some of the bullshit away."
Read more

"This Obie Award-winning performance artist clings to myth like she clings to her microphone, considering freedom, jewel tones, and archetypal power of the mythic figure. Juxtaposing imagery of the horned beast with the politics of the day, Karen Finley proves with 'Unicorn Gratitude Mystery' that she really knows how to spit it...Finley is absolutely irreverent, and uncommonly on time."
Read more

"Finley’s work is very retro...It's free-flowing and not always easy to follow, but that is not Finley’s intention. She is there to engage and challenge...Finley saves the best for last when she drops all the costumes, lets down her hair and reads a story/prose poem. It was this last Finley who pulled me in completely. The Finley with nothing between her and the audience is the Finley that strikes the deepest and the most profound note."
Read more

"Some might consider them little more than profanity-filled screaming rants and non sequiturs...A point that is a major theme of her work: How loathe Americans are to face the grim realities in our society. Finley has a method beneath her work’s apparent madness; an art to her seeming random self-indulgence...If it’s hard to call what Karen Finley does in 'Unicorn Gratitude Mystery' political theater, her provocations resonate with surprising power."
Read more

"Performance artist Karen Finley is angry, topical, and provocative in her new show 'Unicorn Gratitude Mystery.' She’s also hilariously funny...Trump may be easy prey for someone with Finley’s arts and smarts, but she continues to find new, sometimes startling angles of analysis and attack...Karen Finley may paint with a broad brush her conclusions about the psychology of Trump, the Clintons, and our culture’s hordes of believers in easy answers. But the paint is red-hot as ever."
Read more

"As Finley’s giddy triptych unfolds, she illuminates the power of counterfactual thinking in both fairy tale realms and national politics...Finley possesses a wacky sense of style and a go-for-broke physicality, but her real weapon is her voice, with which she luxuriates over the syllables of her text...It may not be possible to fully comprehend or contain the worlds Finley conjures. But it’s that space for feeling, whether it be fearful, joyous, or raging, that creates a space for catharsis."
Read more