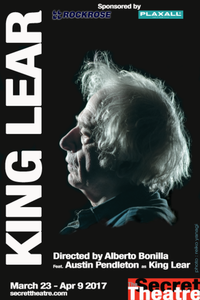 Lear, suffering the beginnings of Alzheimer's, must divide his empire among his feuding children while wrestling with his own mortality. Alberto Bonilla, known for his timely twists on classic Shakespearean dramas, directs this contemporary reimagining of one of the Bard's most beloved works.

See it if Pendleton's aura carries an amateurish production. .Every manner of accent and acting choice is on view, milling around the stage.

Don't see it if My friend had trouble hearing Pendleton, but I did not. Elizabeth Davis, fine as Goneril, is pregnant and her fetus has a bio in the program

See it if see great acting by Austin Pendleton in an up-front and close production.

Don't see it if conceptual which may not be for everyone. needed more as it didn't do much with the setting. very slow. (okay, I'm not a fan of Lear)

See it if Very good version of Lear; Pendleton is excellent.

Don't see it if you are not a Shakespeare fan; small theater, long play

See it if You absolutely MUST see a production of Lear right this minute and are willing to withstand atrocious performances and an insipid concept.

Don't see it if you enjoy Shakespeare, are familiar with the text of Lear, want to watch well crafted performances Read more

See it if you want to eat at the Court Sq diner and see modern costumes and great acting by Pendleton and cast up close and personal.

Don't see it if you can't sit on the most uncomfortable seats of all shows I've scored for 3 hours. It is a good production that should be seen elsewhere.

See it if For Austin Pendleton & Elizabeth Davis. You like your Lear as a character study/psychological drama.

Don't see it if You like your Lear with a larger scope, more political than personal.

See it if You haven't seen King Lear yet. The acting was good, especially King Lear and his three daughters.

Don't see it if You don't want to see a modern interpretation of this classic play in a cheap and small set. And it's too long. Read more

"Starring the consistently compelling and creative Austin Pendleton as Lear...Superbly directed by Alberto Bonilla, the production has an almost bipolar slant...Any good production of 'King Lear' is completely reliant on a solid cast, especially in certain key roles. And Bonilla’s has just the team that works smoothly with Pendleton and possesses the ability to make Shakespeare sound natural in a very contemporary setting...An innovative, exciting version of one of the great plays of all time."
Read more

"The Secret Theatre’s new production resonates deeply with a modern culture made acutely sensitive to the tragedy of dementia...They draw more prancing humor out of Lear‘s scenarios than one usually sees...None of that sacrifices the integrity of Shakespeare’s language and storytelling, the lighthearted sequences as well as the overriding tragedy...A re-conception neither radical nor half-hearted, the result is a respectful and forceful staging."
Read more

"Director Alberto Bonilla and his ensemble focus on developing strong, complex, and believable characters...What I look for in a Shakespeare production is to be shown something new or surprising in a canon I am all too familiar with. Bonilla, Pendleton, Davis, and Macleod made me want to spend time with these characters, and they found something both unexpected and deeply satisfying in the construction."
Read more

“‘King Lear’ has been regarded as one of Shakespeare's supreme achievements. The cast is extremely talented but Austin Pendleton in the lead role was sometimes difficult to understand. While he delivered some excellent monologues, he stumbled over more than a few lines. However, he acted the mad King at the end of the play with flair. The stage props and lighting created a cool and eerie atmosphere that made the personal descent of the King into madness more pronounced. I recommend this show.”
Read more

"A brutal tale of betrayal, madness, passion and redemption. No wonder an outstanding cast of professionals from TV, movies and Broadway is required to meet the challenge...Strong, haunting interpretations...The creative team led by director Alberto Bonilla have delivered a crisp, modern version complete with computers and electric guitars."
Read more