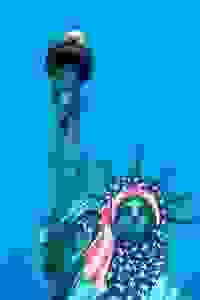 Urban Stages presents a trio of shows aimed at curing the disease of Islamaphobia in America, tied together by the symbol of the Statue of Liberty.

'Dirty Paki Lingerie,' a solo show written and performed by Aizzah Fatima
At the intersection of religion, sex, and politics, Aizzah's characters destroy stereotypes as she delves deep into the lives of Muslim-American women.

See it if you want to see two "Liberty" skits and one solo act about a muslim's woman's choices. "Second Act is engaging and well acted.

Don't see it if you don't want to have to sit through the opening of two skits which were basically unrelated to the "second" act.

Don't see it if you prefer traditional linear stories; the story jumps between different characters that aren't always revisited consistently

"A two-part experience: a first act of two short plays against Islamophobia followed by a solo performance...The second half of the program is a tour-de-force solo piece, 'Dirty Paki Lingerie,' written and performed by Aizzah Fatima...With a stretch of fabric, Fatima transforms herself into various characters. Her earnest and compassionate performance brings to life the joy and sorrow of American-Muslim experience. Those stories are uniquely Muslim, but also relatable to women in general."
Read more

"The writing is a little on-the-nose, as the quick scenes scratch the surface of the issues, but are too short to start a more profound conversation...Despite this, they provide a charming and humorous introduction to the evening...In 'Dirty Paki Lingerie,' Fatima plays each character with precision and skill...Her writing circles back to characters irregularly and inconsistently...However, her stylistic range gives each performance a great deal of insight into the characters."
Read more

"Three short punchy plays and a song in praise of freedom and against Islamophobia...The final element of the theatrical 'Lady Liberty' hat trick was “Dirty Paki Lingerie,” brilliantly written and performed by Aizzah Fatima...The other performers had joyfully served up the appetizers and entrees so that we could sink our teeth into this delicious main course...Fatima is an extraordinary performer with a vocal range that is impressive, and she is enormously funny."
Read more