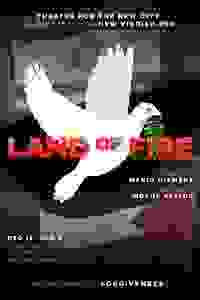 Theater for the New City, in association with New Yiddish Rep, presents the US premiere of a drama based-on-real-events about the reconciliation of an Israeli woman with the terrorist who attacked her some 23 years earlier.

In 1978, an El Al passenger jet was commandeered in London by two PLO-linked terrorists. Twenty three years after the attack, one of the Israeli stewardesses, Yael Alon, decides to write the attacker, Hassan el Fawzi, and visit him in the London prison where he is confined. Driven to find out what led this man to do what he did, Yael discovers how flawed and craven our assumptions are about the complexity of ethnic hatreds.

"The play is an earnest yet didactic attempt to confront the intractable hostility between Israelis and Palestinians and nudge hearts closer to peace...This is interesting material, yet 'Land of Fire' is strangely flat, its characters laying out points of view that come across more like position papers than like human conversation...So the exercise feels largely intellectual, though its aim is to influence emotions."
Read more

"A politically explosive, if didactic, look at the animosity between Israelis and Palestinians that focuses on one act of terrorism and its long-term impact on two individuals...The seemingly intractable problems of Palestinian-Israeli coexistence are plumbed and the so-called victim and victimizer roles are interrogated...It’s poignant and powerful, if heavy-handed, and hammers home an important reminder about political domination."
Read more

"To me 'Land of Fire' was more a debate than an artistic work. Director Moshe Yassur did his best but it must have been difficult to direct...The roles and performances of the male characters were more compelling than that of the heroine."
Read more

"It is a political play with a message, which can give it the feeling at times of a pageant at some kind of peace school, especially as the supporting cast still seemed a bit unsteady...Still, 'Land of Fire' challenges us to particularize, to face the full individual humanity of those with whom we may be locked in conflict."
Read more

View in admin
A
Nickolaus Hines

"'Land Of Fire' could be called unapologetic agitprop, but it's the type of politically motivated theater that doesn't dull the mind or break attention spans. It's not politically charged in the way that most Americans are used to...This is a play to make a person think, not a play to leave a person with happy feelings. The self-aware political partisanship of 'Land Of Fire' comes with its own set of problems aside from the inherently polarizing topic."
Read more

"'Land of Fire' is an extremely serious, politically thought-provoking, and timely play. The play is agitprop, but this production by the New Yiddish Rep manages to avoid, for the most part, the hazards of such works...Moshe Yassur has done an excellent job directing this production. Some of the cast might be light in experience, but it is a talented group."
Read more