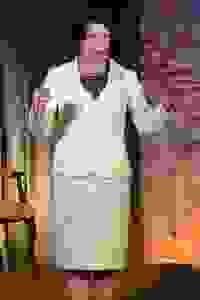 An alternately silly and surreal solo-comedy about Laura Bush that looks to shine light on the intersection of fact and fiction.

Laura Bush is an enigma wrapped in another enigma. She’s shy, beautiful, bookish, and in 1963, she blew through a stop sign and killed a guy. It was probably just an accident. Or maybe, just maybe…it was murder. Join Mrs. Bush for this evening of real-life reminiscences: of her childhood in Texas (all lies!), of her marriage to George W. Bush (a sham!), and of their rapid ascent to the very pinnacle of world power (an abomination!).

See it if You don’t mind being reminded of just how horrid W’s reign of terror really was. Behind every awful man there’s usually an awful woman.

Don't see it if You just can’t take anymore politics. This is clever and a charming way of looking at where we are now but it still makes you look at now.

73
Why a play about laura bush? though fine impersonation in 1-person show, focus on her involvement in killing doesn't add much

Don't see it if not link killing 2 LB’s identity; LB so restrained, disinterested in inner life limits dramatic possibilities; nothing new on "W"/presidency

See it if You need a good time, funny, poignant, memorable

Don't see it if You’re in such a morass over our current White House residents that even a great performance couldn’t help.

See it if you would like to know more about Laura Bush, like dark comedy and very subtle satire. An amazing performance.

Don't see it if if you want a cartoonish SNL-like sketch comedy version of Laura Bush. This is very smart and cynical. Read more

See it if you want to support repertory theater, their playwrights , & actors

Don't see it if Not feeling well Read more

See it if you need a good laugh (or several). You want to see a GREAT performance by Lisa Hodsoll.

Don't see it if you are offended by the lambasting of politics/a former first lady and president.

Don't see it if you have a very small attention span, if you aren't a bit adventurous and up for something interesting, unexpected, and bizarre.

“Sneakily engaging solo play...A nicely understated Lisa Hodsoll...A big issue is that while Allen brings up several of the events that punctuated the Bush administration...he struggles to connect the private and public spheres. The Bushes are also presented as being pretty much ideology-free, which was not the case...But then deep down 'Laura Bush Killed a Guy' is not a political satire but a romantic comedy about mutual redemption."
Read more

"Although she looks more like a young Cokie Roberts than Laura Bush, Hodsoll eerily conjures the political wife poise and Southern sweetness of the first lady we never really knew...Allen seems to want to say something about the blurry line between fact and fiction, and how lies twist and multiply in the kaleidoscope of the Internet. Unfortunately, it never expresses a particularly clear perspective on that phenomenon...Most damningly, this comedy is just not that funny."
Read more

“While not as hard-hitting as it could be, this satire about former First Lady Laura Bush features a hilarious script from Ian Allen and an appealing performance from Lisa Hodsoll...Light on political commentary and analysis...Hodsoll is immensely appealing as Laura Bush...Her performance transcends mere satire or impersonation...As the show goes on, it gains momentum...Offers an opportunity to take a break from our current frustrations and laugh at our political past.”
Read more

“This show is so well written. Hodsoll appears often to be utterly spontaneous and she does deftly improvise a few times in the show because she can — her tool box matches the brilliance of her author’s, especially when responding genuinely to audience reactions in this intimate space — but upon examining the script, I saw that many of the real juicy vulnerable moments I felt penetrate my skin were the result of just damn good writing. You have to see this show.”
Read more

"A fascinating show, with minimalist materials other than the subject's life story...Directed by John Vreeke, this 85-minute one-woman show reveals sides to Mrs Bush that were rarely glimpsed in the media. She is charming yet snarky, likening circa-1993 Hilary Clinton to Benjamin Franklin, admitting to her love of smoking...Whatever your politics, you will learn a lot about our former FLOTUS, and the hardships and triumphs she has faced."
Read more

"Turns out to be something of a stealth enterprise, generating sympathy for a woman who is presented as more complex than the public perception of her. At its best, Ian Allen’s play challenged me to think about my own political perceptions...There is some politics in 'Laura Bush Killed A Guy,' although little of it persuasive...More convincing are Laura’s sometimes poignant and pointed accounts of the toll that public life takes on any expectation of privacy."
Read more

"Keenly written...Under John Vreeke’s astutely understated direction, the uncanny Lisa Hodsoll once again stars...Everything about her and her brilliantly-controlled portrayal screams white privilege...The Klunch’s provocative production of 'Laura Bush Killed a Guy' at The Flea will have you laughing out loud, then shaking your head and gritting your teeth at its mock nostalgia for the ‘good old days’ of the Bush years."
Read more