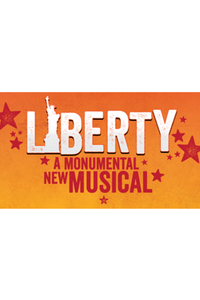 Inspired by historical events, this family musical chronicles how the Statue of Liberty became an immigration icon and symbol of freedom.

Lady Liberty was not always a beloved national landmark. She originally arrived on our shores in the middle of a heated immigration debate and a terrible recession, and political forces quickly aligned to deport her. With a strong resolve and a mighty spirit, she battles to gain acceptance and a place in our society. In this family musical, best for ages 8 and up, the Statue of Liberty comes to life as a wide-eyed teenage girl.

Don't see it if General admission with chairs being scraped around by late arriving tourists chatting with their kids, FREEZING a/c, pretty unendurable.

See it if you'd enjoy a blatantly unsubtle yet surprisingly moving story of the value of immigration to America.

Don't see it if you're lactose intolerant. There's a fair amount of cheese for one show. But the actors are talented and earnest, and perfectly cast.

"Earnest, sentimental and intermittently charming, this family production offers a slice of American history that here tastes mostly like apple pie. Whether the show engages you will partly depend on how easily you accept a walking, talking statue...The strengths of 'Liberty' include its songs..It also has a winning star in the teenage Ms. Shapiro, who brings pure conviction to her peculiar role. Under Evan Pappas’s direction, the rest of the cast is largely impressive."
Read more

“Designed to spoon-feed a young audience the idea that immigrants are good and those opposed to them are bad...The idea of a girl statue offering little homilies gets old pretty fast, and the show's creators have little more to offer in the way of drama. The songs favor an '80s-'90s middle-of-the-road pop sound that isn't too appropriate given the subject matter and isn't terribly compelling on its own terms...Personally, I'd wait for a revival of ‘Ragtime’, and take the kids.”
Read more

"Because Liberty isn't really a character—and certainly isn't a person—her quest is as meaningless as it is preachy, which is to say quite a lot. And given the stiff posture, unyielding facial expressions, and stilted singing voice Shapiro brings to the part, she's not even especially likable. (She is, however, utterly convincing as a statue.) There's no point to any of this except for Liberty to teach and for us to listen, which is made harder still by the lessons being not that much fun."
Read more

“The question is: who is the intended audience? It is too simplistic for adults and has too little action for children. With a bouncy score and easily accessible lyrics, ‘Liberty’ is pleasant without being exceptional. It does prove timely with lines like ‘America, America for the real Americans,’ ‘Isn’t it time we closed the golden door?’ and ‘You can’t put up a wall’ which suggests nothing much has changed in the last 132 years.”
Read more

"A perfectly timed, unfortunately relevant and utterly thrilling musical…The entire cast is excellent…While the performance of Regina Schuyler veers into caricature, the direction by Evan Pappas is otherwise admirable…It’s a family-friendly show and even very little children were engrossed. It addresses our aspirations, the America of our hopes and dreams and, yes, this reviewer wept!"
Read more

"Family-friendly, it surely beats an old history text for teaching you about that legendary Lady…The 17 musical numbers range from the sassy to the sublime…Goldstein adumbrates the key events of its journey with symbolism rather than retelling its history in a strict sense. And, as helmed by Pappas, it works. Abigail Shapiro turns in a solid performance as the protagonist Liberty. She pulls off her lead role with surprising confidence and has the pipes to belt out her various songs."
Read more

"The show’s pop-oriented songs are serviceable but not innovative or particularly tuneful. Some numbers are sung with ringing fervor...Doing the score no big favors is the fact that it is presented as a recorded soundtrack…The libretto is probably the show’s strongest aspect. Although 'Liberty' seems a little heavy-handed at times in the heart-on-sleeve way it wears its pro-immigrant sentiments, the story clearly drew in most of the adults and kids who saw it with me."
Read more

"Misleading as its history may be, and middling as are much of its book and score (little of which attempts to suggest the music of the day), 'Liberty' nonetheless serves as a moderately effective work of historical propaganda on the importance of immigration in making America great...It really doesn’t get your red, white, and blues unfurled until its final moments when the company sings Lazarus’s words while striking images (I wish there were more) of the statue’s construction are shown."
Read more

"Liberty' is blessed with some talented singers and a story that should capture American’s heart, but sadly doesn’t...This musical seems amateurish and trite. Maybe if we cared about the statue, the show would have made us care just a little bit more…This 80-minute show is filled with seventeen songs that all sound alike. The canned music for the most part overpowers the terrific singers…The staging by by Evan Pappas seems forced and extremely boring after the first 20 minutes."
Read more

"Undeniably well-intentioned but ultimately tepid...The nice idea here is to have the statue portrayed by a young girl and treated very much like a living person. There’s another strong idea couched in a song called 'America for the Americans,' which has the effect of reminding audiences that the victimizing of immigrants then is still going on today as Donald Trump campaigns...The music throughout is generically rousing and the figures depicted are also generic."
Read more

“An informative musical that hopes to teach, which gets in the way of a clean, fleshed-out story...Whether it was the canned instrumentation or the music itself, the score was very much cartoony, but not in a good way…‘Liberty’ has a capable company. It’s evident these performers are seasoned. It’s a shame their material didn’t match their talent...The story of Lady Liberty is cool in concept but this musical didn’t know what it wanted to be.”
Read more

"Liberty is portrayed as a young girl (delightful performance by Abigail Shapiro)...The famous lines 'Give me your tired, your poor…' are made into a beautiful song 'The New Colossus' and makes everybody’s eyes sparkle with tears...'Liberty, a Monumental New Musical' is a very engaging rendition of history from human perspective. Directed by Evan Pappas, it is a delightful family show."
Read more

“The production is fun, and kid-friendly, but very uneven. While the libretto is outstanding, the music by Jon Goldstein sounds canned; all the tracks seem to have been created on a synthesizer. The stage also feels small, not only because it is small, but because Evan Pappas’s staging lacks dynamics and, at times, deflates the production. Some choreographed movement would have given the actors some breadth and depth and the production real musical-theater flair.”
Read more

“Purposely written on a grade-school level to attract families. I am not sure how many parents will find the show all that involving, but children should enjoy it...Shapiro needs much more guidance. Her singing voice has moments of loveliness...I will place the blame here with Pappas who has not guided her properly. She has definite possibilities...All these reservations could be rectified for the show itself has an appealing quality, it just needs to be executed to its full advantage.”
Read more

"It gave me goosebumps. In this intimate theatre, this show explodes with talent, history, original songs and acting that is thrilling to experience...A show that is appealing to patrons of all ages...Experience 'Liberty, A Monumental Musical' with your family. It will give you a sense of history, but more importantly, you will be proud to be an American. To see this statue finally step onto her pedestal and raise her torch is something you won’t soon forget."
Read more

“The story might be confusing to younger kids who don’t understand symbolism yet, but I found it very compelling and moving. ‘Liberty: A Monumental New Musical’ is a charming musical that left me feeling patriotic and grateful to be living in a city so rich in United States history - I might even hop the ferry and visit Lady Liberty soon myself.”
Read more

“Doesn’t quite reach the top in terms of dramatic artistry and compelling storytelling...The music is a mix of pop styles and classic musical theatre styles. Overall the score feels disconnected due to the constant back and forth of these two musicals styles and the lack of cohesion and through-line…‘Liberty’ at present is a 'good musical', but it’s not great, that will take more time, and brilliance will take even longer.”
Read more

"A modest but magnificent new musical that tells the real story of the average American immigrant. The 80-minute, family-friendly show recounts how the Statue of Liberty came to the United States and became the iconic symbol we all love...There are many funny moments in Liberty. But at other times, 'Liberty' can be extremely moving...'Liberty' is more than a breath of fresh air. It is the voice out of the whirlwind."
Read more

"While it opens to the tone of a light-hearted musical comedy, the piece builds unexpectedly to intensely moving heights...'Liberty' incorporates the narratives of many New York immigrants into the tale...The more emotionally affecting staging moments come at the open and close of the piece...Though it may need more content to lengthen the piece to the Broadway standard, 'Liberty' is a surprisingly effective piece of theatre...and has the potential to go on for far longer."
Read more

"A winning Off-Broadway musical…Aimed at young adults, but with appeal for New Yorkers of any age...The heroine of the title is a living, breathing and singing embodiment of the famous statue...The charismatic actress, 14 years old, has the vocal control of a seasoned pro and a quiet stage presence that belies her years…The show is a welcome jumping-off point for a discussion about the ingredients that make America the multicultural bouillabaisse it is today."
Read more

"A touching, tuneful tale about the most famous immigrant to grace New York Harbor: Lady Liberty herself…Her story may be fantasy, but it conveys a deep and heartfelt truth…The statuesque Ms. Liberty is brought to life by a petite teenager with a full-sized talent, a young immigrant played by the sweetly vulnerable Abigail Shapiro…The creative team and terrific cast truly do a monumental job!"
Read more