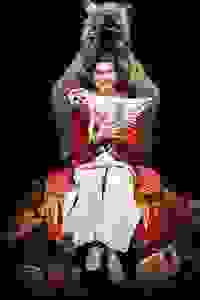 'Link Link Circus,' co-starring a dog named Pan, is at once comic and scientifically informed. Over the course of the performance, Rossellini transforms herself into Aristotle, Descartes, a medieval theologian, B.F. Skinner, and Charles Darwin—discussing the essence of human beings and what distinguishes us from the “brutes.” Accompanying Rossellini’s monologue are projections of her short comic films, home movies, photos, and drawings. Pan, an accomplished dog performer, plays various animals.

Don't see it if you're a science denier, you have zoophobia, or you expect more "circus" and less "lecture" from Isabella's show.

See it if Love/like animal and science. Isabella Rossellini and her dog.

Don't see it if Not traditional show, not long a little over one hour. Read more

"Rossellini's enthusiasm for the subject is infectious as she delivers an enjoyable lecture encompassing scientific theories about animal sentience, referencing philosophers and scientists...Rossellini proves a delightful instructor, cheerfully willing to look ridiculous or make fun of herself to make her points...Executing tricks on demand and hitting every cue with a professionalism that would put most Broadway performers to shame, Pan emerges as the true star of the evening."
Read more

“One of the brainiest shows in town...Though better known to the world as a model, actor and filmmaker, Rossellini is also a scholar in the ways of animal behavior and an activist for wildlife conservation...Charming and intellectually stimulating.”
Read more

"A modestly astonishing 80-minute discussion...Through it Rossellini examines the 'links' between animals and humans. She’s interested in how animals learn—demonstrating that they do learn but pointing out that learning doesn’t necessarily equate with thinking...Moreover and thanks to her seemingly impromptu, carefully worked-out production, the audience has learned plenty and in an undeniably astonishing way."
Read more

"Enchanting exploration containing scientific tidbits where she is joined by her dog and a puppeteer for a delightful 80 minutes. Dressed in costume designer Fanny Karst’s fabulous modernistic take on a ringmaster’s uniform with flowing red tails, Rossellini is radiant as she holds forth in her cheery distinctive accented voice...Animal trainer extraordinaire Bill Berloni guided Darcy’s magnificent performance."
Read more

"There are moments when Ms Rossellini clearly needed to rely very heavily on her notes, and at times she seemed to stumble on her memorized monologue pieces, both in narrative and delivery...Although this is not exactly a compelling night at the theater, the results are an entertaining and incredibly informative performance piece about the link between animal behavior and human behavior, that animal lovers across the board will no doubt enjoy."
Read more

"She is voracious and insistent. And because this is her passion, she has little trouble passing on the passion to us. What gets in the way is everything else. The evening is basically a dissertation defense and as such is fascinating. The addition of props, a puppeteer and especially her dog, Pan, is not only unnecessary, but it is distracting...She is an utterly charming presence on the stage. She can afford to keep it simple."
Read more

"An absolutely charming 'theatrical conference' on Rossellini's academic research and conclusions...Coltish and didactic, charming and effective, the work is a must see for any animal lover…The work, though, is rarely desultory, and while silly, never capricious. An erudite, natural performer who communicates with great confidence and focus, Rossellini is refreshingly playful and informative…Rossellini is genuinely fascinated in the subject matter and shares it with an open heart."
Read more

“The ‘one-woman, one-dog show is part illustrated lecture, part animal act, and wholly engaging and enjoyable...The show’s vibrant circus theme and stars are supported by a colorful artistic design...’Link Link Circus’ is the perfect combination that makes learning fun, eliciting ‘ooohs and ahhhs’ for the irresistible Pan and ‘ohs and hmmms’ for the wealth of knowledge provided by the ever-charming Isabella Rossellini.”
Read more

"Thoroughly charming and wholly educational...Serving as ringmaster, Rossellini uses wacky humor, playfully silly costumes, cardboard cutouts...and other oddities to take a look at animals...concentrating primarily on intelligence, the mind, and consciousness...Rossellini is warm and engaging in her role...There’s a sweet Pee-wee’s Playhouse vibe to the production and the feeling that anything can happen at any moment...An enormous amount of fun."
Read more

“A show that prominently features an adorable dog is remarkably free of cuteness...Likely this has to do with the preference of Rossellini for surreal humor over cloying sentimentality...The aesthetic is vaguely circuslike...Although she sometimes speaks from behind a lectern, Rossellini is anything but academic...Often you wish she would linger on a given topic a bit more, gave it more depth before zipping off, but it is hard to deny how pleasurable Rossellini’s company is.”
Read more