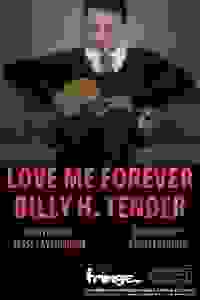 Part of FringeNYC: January 31st, 2021: Enter Billy H. Tender, Canadian child-star. Billy’s family has splintered; today, they’ll need each other more than ever. After a sold-out premiere in Toronto, this virtuosic tragicomedy reckons with the cultural pandemic of superstardom.

FROM THE ARTIST:
Jesse LaVercombe (playwright/performer) is a Toronto-based actor and writer from Minneapolis, Minnesota. He has performed professionally across Canada and in New Orleans and New York City, as well as on Canadian and American tours. His first play, Preacher Man (also directed by Adam Lazarus), received productions in Montreal, Vancouver, Fredericton, Toronto, Oklahoma and New York City where it won the Best Short Solo Award at the United Solo Festival and was published by Indie Theatre Now, New York, NY. He co-wrote (with Step Taylor) Donny’s Second Book, which premiered at Saint Thomas University. He was a composer (with Adrian Shepherd) for The Life of Jude at SummerWorks (published by Scirocco Drama 2015), and his writing and music compositions were also showcased in performance pieces at the Vancouver Art Gallery, Wrecking Ball, the PuSh International Performance Festival. His short films “Philip” and “Tony” were produced by the Canadian Film Centre. He also writes for Intermission Magazine. Training: The National Theatre School of Canada, Canadian Film Centre Actors’ Conservatory
.
Adam Lazarus (director) is an award winning actor, director and acting instructor whose work has been showcased nationally, in the USA and Europe. He is a sessional instructor at The National Theatre School of Canada as well as a regular facilitator of workshops, including recent consultations for Soulpepper, Theatre Passe Muraille, Ziauddin Yousafzai for his 2014 TED TALK My Daughter, Malala, the Vancouver Olympic Committee, Light Fires, Apostle of Hustle, Buddies in Bad Times, DanceMakers, The Toronto Film School, Pig Iron Theatre, CanStage, Tapestry New Opera Works, The Sibiu International Theatre Festival, and Volcano Theatre. Adam was the artistic-director of the Toronto Festival of Clowns for 10 years and is a graduate of and former apprentice to Master Teacher Philippe Gaulier.

Guillermo Verdecchia (dramaturge) is a writer of drama, fiction, and film, as well as a director and actor. He is a recipient of the Governor-General’s Award for Drama for his play Fronteras Americanas and a four-time winner of the Chalmers Canadian Play Award. His work, which includes the Governor-General shortlisted Noam Chomsky Lectures (with Daniel Brooks), the Seattle Times’ Footlight Award-winning Adventures of Ali & Ali (with Marcus Youssef and Camyar Chai), A Line in the Sand (with Marcus Youssef), bloom, and Another Country has been anthologized, translated into Spanish and Italian, produced in Europe and the US, and is studied in Latin America, Europe and North America.

Currently an Associate Artist with Toronto’s Soulpepper Theatre, where he heads new play development, Guillermo is also a PhD Candidate at the Centre for Drama, Theatre, and Performance Studies at the University of Toronto. He has published a number of articles and contributed book chapters on aspects of intercultural theatre practice in Canada. He has an M.A. from the University of Guelph where he received a Governor-General’s Gold Medal for Academic Achievement.

See it if You like plays about fading pop stars and their lesser known siblings who suffer in silence.

Don't see it if You expect to understand what is going on at all times. You like a coherent story.

See it if you're looking for a refreshing, original piece of theatre unlike anything else you've seen!

Don't see it if raunchy material makes you uncomfortable, or if you hate audience participation.

See it if you are ready to sit with the live wire of genius.

See it if You like one-man shows, are familiar with contemporary pop culture and news, and enjoy quirky, fun music

Don't see it if you are made uncomfortable by taboo topics, audience interaction, or have trouble following shifts in character among a single actor

Don't see it if You're looking for an epic Broadway musical. This is small scale. Intimate setting and show.

See it if You think that pop music, phone sex, and a hilarious future for today's pop stars can still make a meaningful show.

Don't see it if Can't handle something that's serious and hilarious at the same time.

See it if you're young. Teenagers, 20-somethings, 30-somethings. It resonates with anyone who uses social media, & loves brilliant writing & acting.

Don't see it if you have never used the Internet or social media. You might feel left out. This is a work for 'today'.

See it if You want to laugh your way through the existential terror of our weird-fucking present.

Don't see it if You have a vanilla sense of humour.

"Jesse LaVercombe’s charming, bittersweet, oddball comedy about a pop star in crisis, his adoring little brother and their theater-theorist mother — all played by Mr. LaVercombe, though I bet a bunch of the crowd had no idea it was the mother who was engaging them in audience-participation sex-chat dialogue."
Read more

“There’s a lot going on in this intense show, from a predictable mental-breakdown arc to a critique of social media and some awkward audience-participation phone-sex banter - as well as diverting folk songs that start out charming and then turn creepy. It doesn’t quite add up, but it’s enough to make your wonder where LaVercombe might be in five years.”
Read more

"What LaVercombe lacks in musical technique, he more than compensates for with boyish charm, impeccable timing and aching vulnerability. Moreover, his writing is taut, funny, and shrewd...Ultimately, ‘Love Me Forever’s’ rocketing pace also proves its own worst enemy; minimal action and narrative progression make this solo show feel stretched even at an hour...Yet this does not detract from a show that is otherwise probing, sincere, and highly entertaining."
Read more

"LaVercombe's visceral play is unique in the sense of approach. LaVercombe has versatility as a performer. Through his speech, musicality, and movement, he showcased his vast skills. Yet when it came to character, he didn't necessarily create distinct characters in the common sense of a solo play...Director Lazarus took LaVercombe's script and elevated the material in a manner some solo works never achieve...'Love Me Forever Billy H. Tender' is a play geared best for the millennial mind frame."
Read more

"This mind-blowing, substantial, and manifold text is from an eagle-eyed public voyeur – Jesse LaVercombe. He has not only written the script and co-written the music, but also performs in this one-man labyrinthine, psychological, tragicomedy masterpiece. The mirror he holds up to the world is enormous and reflects all of the warped fun house, distorted aspects of ourselves, as well…I would like to write a thesis on LaVercombe’s acting abilities."
Read more