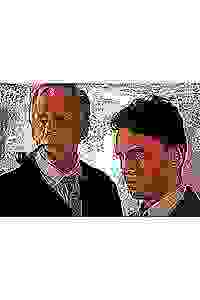 Russell is heterosexual, hedonistic and agnostic; Wittgenstein is puritanical, gay and Jewish. Russell is an imprisoned pacifist; Wittgenstein a decorated combat soldier. Wittgenstein is intensely religious; Russell mocks religion from first to last. Wittgenstein regards Russell as his “mental father,” but their relationship has elements of rivalry.

In Lackey’s telling, Wittgenstein’s thinking kindles the demolition of facts in our post-truth world while Russell’s inspires the National Science Foundation. This play will show you how.

See it if You like historical dramas. This is interesting, well acted and given a lot of energy trying to make it come to life.

Don't see it if You have no interest in learning anything about either of the two principles. They spend way too much time moving set pieces around.

See it if You like these two philosophers or knowing a little about them. Good acting and directing. About two completley different people.

Don't see it if If you need something that requires less attention or something like. It helps to know who these people are before you go to see it.

See it if you want to experience a good biographical play that makes complex philosophy comprehensible while acknowledging the influence of history.

Don't see it if you dislike plays depicting serious subjects even with a sprinkling of humor and interesting staging.

See it if you are interested in 20th century history or philosophy or both.

Don't see it if neither history nor philosophy interest you: In this play the drama of the situations almost requires an outside framework. Read more

See it if you like good character studies and the conflict between two very different people. Wonderful acting and effective staging.

Don't see it if you don't like talk about philosophy much of which was above my head. The great characters made it worth it.

See it if You enjoy period pieces...Changes of set every 15 minutes or so...

Don't see it if A very long play with very little to say...

See it if you have an interest in philosophy. It's helpful to have some familiarity with the characters and their relationship beforehand.

Don't see it if philosophy and philosophers bore you. Read more

"'Ludwig and Bertie' gives us insight into the relationship of two of our greatest twentieth century philosophers...Bertie, played smartly by Stan Buturla, is the wise old professor at Cambridge when he meets the almost half his age young student Ludwig, poignant, headstrong and hungry..."
Read more