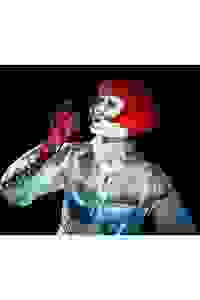 In 2019, WaxFactory celebrates its 20th anniversary with LULU XX, a new cross-media performance, devised by the company's co-founders. Our production, inspired by Wedekind's timeless female protagonist, challenges the idolatry and misogyny of the male gaze in artistic representation of women, exposing its conflicting tendencies. Inspired by the momentum of feminist protest, we revisit the unapologetic heroine, asking new questions about agency, representation and violence in the contemporary world.

See it if Great staging! Well done play noir about a woman in different life situations. Great acting. An edgy play that keeps you interested. 50 min

Don't see it if Has a lot of violent themes to it. If you want a cheerful play.

See it if you'd like grand staging with great lighting and visual projections on which a series of themes are portrayed by 1 actress with a few props.

Don't see it if you are looking for a play - this is performance art, impeccably carried out by the technicians and an energetic performer.

See it if you are curious about performance art. This is as good as it gets - mixed media dedicated imagery in service to an idea. Exquisite costumes

Don't see it if you expect a play - no plot, little dialog, short duration,

See it if you’d like a sharp, episodic “cross-media” contemporization of a notorious 20th century femme fatale so the woman herself now sets the terms

Don't see it if you’re looking for a standard drama, or a straight update of Wedekind’s Lulu plays. Read more

See it if Edgy, fast pace, with each short alittle violent. Its sexy and powerful but all end deadly.

Don't see it if Not Standard drama, not for everyone, has strong flashlight one part.

See it if You're up for a visually striking, inventively designed production; terrific use of lights/sound/setting and atmosphere creating A+ images.

Don't see it if Expecting narrative or a modern update of Wedekind or Pandora's Box; an empowered, visually edgy Lulu, but an ultimately modest and prim one Read more

Don't see it if Know little about “Lulu”; expect a STORY; loud gunshot & strong flashlight; more like a installation at MoMA

See it if into the experimental and visually inclined

Don't see it if if you NEED a plot Read more