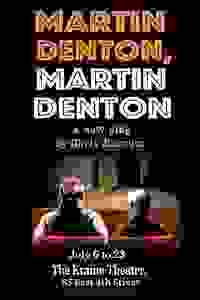 FRIGID New York @ Horse Trade and Elephant Run District present the world premiere of a play about Martin Denton, the creator of nytheatre.com.

An accountant in D.C. falls in love with theater in New York. After suddenly losing his father, he impulsively creates nytheatre.com. He gives up his comfortable life, spending thousands of nights in the audience and even more days at his computer bringing attention to notable, but often under-recognized artists. Working with his mother over two decades, he writes and edits thousands of reviews, publishes hundreds of plays, and posts scores of blog pieces, interviews, and podcasts. In doing so, he revolutionizes how the arts are covered and helps to usher in the indie theater movement. If you created or saw NYC indie theater during the last 20 years, chances are you've been impacted by his work. Now watch his untold story move from his desk chair and aisle seat to the stage.

See it if You think outside the box...have been seeing theatre in NY for many years, especially shows off the radar...want a trip down memory lane.

Don't see it if You're only interested in Broadway or think that off and off off... INDIE THEATRE...is somehow inferior.

See it if you want to learn about an important voice in the development of the Off Off Bway scene, dramatized in a fairly interesting and amusing way.

Don't see it if you're not a downtown theatre insider or familiar with the "indie" theatre scene. This feels more Wikipedia-ized than a narrative drama. Read more

See it if For theatre nerds of a certain age (& time) this docu-drama is quite enjoyable. Meta plot devise can confuse but Harcum as Denton delights

See it if You want a poem to indie theatre. You've ever seen or participated in Off-Off Broadway. You like creative shows w/ a low budget.

Don't see it if You have no interest in Off-Off Broadway. You want bigger production values.

79
Charming docu-drama, Excellent performances, 9/11 sequence absorbing, Quirkily as luck would have it story, Fascinating history of who he {md, md] is

See it if interested in indie theatre movement, the quirky relationship of a groundbreaking futurist & his mother, & dedication to an idea

Don't see it if you care not 4 Indie Theater, don't care about a man's relationship with his mother, nor riveting account of surviving 9/11 near groundZero

See it if You enjoy theatre and its recent history tremendously! An insiders view to NYC for the past 30 years via the world of theatre BRILL!

Don't see it if You're a tourist that should be at Wicked but cannot get a ticket. lol

See it if you want to see a story about someone who loves the theater.

Don't see it if you dislike a bio that is an advertisement for oneself and is filled with less than interesting tidbits about a life with humor that misses.

See it if you're involved in the theatre, knew Martin Denton, are a fan of the author or the cast. The acting was very good.

Don't see it if if the life of Martin Denton has no meaning for you. Read more

"Some anecdotes draw a smile...Other times, Denton’s ecumenical attitude feels disingenuous...There is a distinction between cheerleading and reviewing, but Denton does not appear to care about it, and Harcum is not interested in challenging his subject. Indeed, Harcum never wavers from the perspective of Denton, and never places him within either the singular context of the Off Off Broadway ecosystem, or the New York theater scene in general."
Read more

"A heartwarming journey through time as told by two people, partners in both comedy and drama that are as inseparable as their memories from their minds...Sure to captivate audiences with good, kooky laughs, bittersweet nostalgia, and a gained appreciation of just how important theater is to the structure of this world...Watching this show compels the audience to harbor an appreciation of these two characters and the actors who so aptly portray them in a rather unique way."
Read more

"An enchanting tale of how one man's deep love for the art form changed the landscape of its era...The play feels almost improvised because of its fresh, energetic nature, which is not to say Harcum hasn't written some thoughtful, beautiful scenes...There is also a meta element that makes the play feel like a breathing organism. Those unfamiliar with Denton, his work or even the indie theatre scene should also find enough pleasure in the play. If nothing else, it's a love song to theatre."
Read more

"Though Harcum's performance as Denton is, in a word, endearing, the play he wrote keeps veering from being earnest and serious to being silly, with schizophrenic results. With only a modicum of success, Marisol Rosa-Shapiro tries too hard to differentiate the many characters she portrays. Director Aimee Todoroff might have abetted Rosa-Shapiro more by getting her to tone down her affectations. Nor do Barbara Davidson's costume designs provide much to describe or respond to."
Read more

"It’s a nice story that offers audiences a sentimental journey through Off-Off-Broadway byways, but it is not an especially dramatic one...Fortunately, Harcum has devised an informal, presentational-style narrative that he affably shares with Marisol Rosa-Shapiro...Aimee Todoroff, the director, fosters a casual atmosphere for this production, which is reminiscent of many shows in the New York International Fringe Festivals that the Dentons covered so faithfully during their downtown heyday."
Read more

“This wonderful show does a lot with an inflatable couch and a few boxes and posters. Elephant Run is all about preserving the history of avant-garde theater. In this show, they go where even they haven’t gone before. Judging by the joyous atmosphere in the theater, this show struck quite the chord. Director Aimee Todoroff has transformed her subjects quite believably into a bunch of theatergoers who for 17 years knew exactly which venue they were going to be in every night.”
Read more