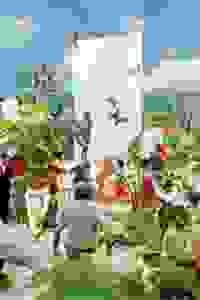 The Foundry Theatre presents an experimental work about the son of a recently deceased artist.

Renowned 20th-century African-American artist “Uncle Jimmy” has just died poor and alone, leaving his best known work, 'The Illuminated Twain,' a radical retelling of 'Huckleberry Finn,' in pieces. His estranged son struggles to eulogize his father when he is interrupted by the arrival of his late dad's widow, Edna Finn. Written by W. David Hancock in collaboration with visual artist Wardell Milan, 'Master' exists between the language of theater and the silence of art as it confronts the inadequacy of our American stories head-on.

See it if you enjoy performance/installation art, are a fan of W. David Hancock's experimental work, or like being challenged by new forms

Don't see it if you don't like experimental work or being unsettled by open-ended provocations about race, Huck Finn, art, family and cultural memory

See it if You're looking for something really deep.

Don't see it if You don't care about important things like race, art, and death. Read more

See it if You want a transformative experience in the theater and you care about what great art has to say about the times we're living in.

Don't see it if You want to be entertained. Read more

See it if You are smarter than I am. This may make sense to its creator, who has focused on it, but he does not strive to let others into his vision.

Don't see it if You want to come in, sit down, and enjoy a show which tells a clear story, easily understood, and go home entertained or educated.

"If it begins in a kind of constructed confusion, as it did for me, it ends in something disturbing and powerful...Under the direction of Taibi Magar, the chaos is beautifully engineered...Ms. Magar manages to find the sweet spot between shallowness and overthink. One key to this success is the unusually high quality of the performances...But it is also the unusually good fit between material and medium that makes 'Master' exceptional."
Read more

"Part art exhibit and part performance, this Foundry Theatre production is a commemoration and a damnation of a fictional outsider artist...Jennings and O’Sullivan give powerful performances...If you prefer cohesive narratives, 'Master' may frustrate you; it’s a postmodern approach to remembrance, with human life treated as both more and less than the disordered scurf it leaves behind. But if you’re willing to explore the edges of a story, it can be a moving and gratifying experience."
Read more

“A provocative work of theater-art. Hancock, visual artist Wardell Milan, and director Taibi Magar have assembled a mind-bogglingly intricate and multilayered audio-visual experience that delves into the issue of race in startling, sometimes chilling ways…The realism of the production is appropriately unnerving...A unique work, 'Master' is one of the most fascinating theatrical experiences you will see this season…There is much to admire in this ambitious, complex work.”
Read more

"'Master' is a museum exhibit, a memorial service, and a family drama—and thoroughly haunting on all three counts...A thoroughly original invention that welds the political to the personal in a way that many playwrights might envy...Every detail feels carefully considered...In addition to obtaining superb performances from her two leads, the director, Taibi Magar, has orchestrated the entire experience flawlessly, letting the deeply evocative material speak for itself."
Read more

“David Hancock extends the world of 'Huck Finn' beautifully and holds up a mirror against reality in this genre-defying play. The line between reality and fiction disappears as director Taibi Magar transforms the piece into an immersive experience. The presence of the artist is palpable…The actors’ nuanced performances also make it easy to fall in love and sigh for the loss of a man who never lived…There is power in the simplicity and sincerity of ‘Master.’”
Read more

"Under the supervision of Taibi Magar, O’Sullivan and Jennings lend intricate emotional detail to Hancock’s lean, provocative script. The upshot is a portrait of a four-member family whose story reflects a national heritage of tortured racial relations from the founding of the U.S. to the present. With the monologues sensitively performed and reinforced...'Master' is a multimedia effort of universal poignancy, with its dark aspects offset by Millan’s visual whimsy and refreshing humor."
Read more

“A fascinating performance experience that delves into issues of art, legacy, grief, race, literature, and appropriation…Jennings delivers a powerful performance…It’s the ideas embedded within the speeches of Edna, and particularly James, that make this performance so intriguing. The actual structure of the piece is highly unusual, as so much of it is audience-driven as theatergoers seek out meaning in the objects around them.”
Read more