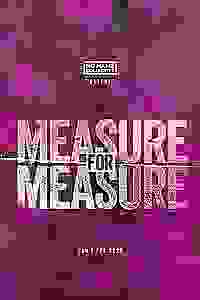 Measure for Measure (No Name Collective) NYC Reviews and Tickets

Shakespeare's problem play explores a broken justice system built by men and offers battle of wills between two people who claim to be guided by faith in a Vienna dominated by egos, idols, and debauchery.

The Duke of Vienna vanishes abruptly leaving Lord Angelo as his successor. In his stead, Angelo enacts his own sense of justice causing mass chaos throughout the city. The only person who can stop him now is a nun-in-training, named Isabella. A story of power, those who abuse it, and those who suffer at their hands. Does this sound familiar?

See it if you want to take advantage of seeing small theaters and unknown actors doing a creditable job of putting on a timely play by Shakespeare.

Don't see it if you're disinclined to see unknown actors performing in small venues. Read more

See it if You like a smart, well-staged adaptation with modern-day relevance.

Don't see it if If Shakespeare is not as you like it. Read more