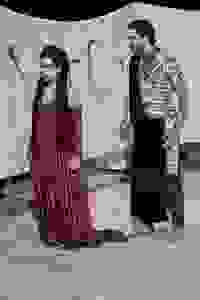 La Mama and Teatro Patologico, the Drama Academy for differently abled children, present an ancient Greek tragedy by Euripides, in which an angry betrayed wife is furious at her husband, Jason.

Medea is a wife and a mother. For the sake of her husband, Jason, she’s left her home and borne two sons in exile. But when he abandons his family for a new life, Medea faces banishment and separation from her children. Cornered, she begs for one day’s grace. This performance combines professional actors, who perform in English, with a chorus of 14 actors with diverse abilities (including epilepsy, neurological disabilities and down syndrome) from the University program of the Rome-based 'Magic of Theater' Drama Academy.

See it if you know the story of Medea but are looking for a new version of it. This show is very original in its adapatation.

Don't see it if You don't know the story or aren't a fan of experimental theatre.

See it if you want to see deep themes of theater, humanity, and madness played out in todays voices. A tragedy you can't look away from.

Don't see it if your stomach clenches at slow moving train wrecks. It's hard to believe and impossible to reconcile; and, yet .....

See it if If you love Tyler Perry

"Despite these points of presentation the sheer exertion of emotional power the performers wield in 'Medea,' and the consistently ingenious simplicity of their staging renders this evening a unique and exciting achievement."
Read more

"Though not exactly seamless, the professional actors and the chorus collaborate well, with neither part seeming more or less important...Composed of disparate elements – sometimes clashing, sometimes blending beautifully – and held together by effort and passion, this production is sure to inspire mixed feelings. Yet it is motivated by the commitment and good intentions to create a compelling and truly unique piece of theatre."
Read more