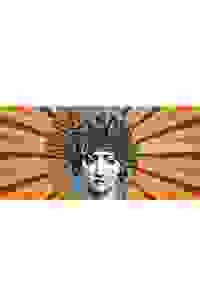 A darkly comedic, immersive look at the Medusa myth and other female archetypes, juxtaposing the messages within these stories against interludes of modern womanhood.

Medusa was a young maiden in service to the temple of Athena. When she caught Poseidon’s attention her fate was sealed - the god forced himself on her in the temple, yet Athena condemned Medusa for having lost her purity, and turned her into the hideous Gorgon monster we know, with snakes for hair, so dangerous and hideous that her gaze will turn a man to stone. "Medusa Volution" is inspired by her story - by the loss of her humanity, and her condemnation and isolation as a punishment for her sexuality meted out by both male and female gods.

"If you liked Madeline Miller’s bestseller 'Circe,' you should really catch the last four performances of Sophie Amieva and Suzanne Bagert’s 'Medusa Volution' at happylucky no.1. Just as Miller allows the nymph to describe in her own words her special skill set (turning men into pigs), the playwrights and their all-female Samvia Theatre group directed by Amiva create a strong collective voice untangling Greek/Roman mythology’s if looks could kill eternal bad hair day."
Read more

"Sophie’s re-examining of this Greek tragedy is quite timely...'Volution' finally gives our female archetypes a chance to tell their story, reassess the version we know and asks a lot of questions...'Volution' has more substance in its one act than some presidential administrations. The explosive actors, (multicultural mavens, really) flow and are extremely adept in giving you their all."
Read more