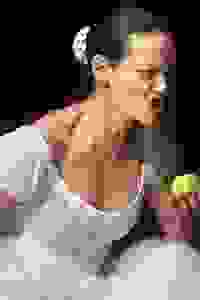 In rural Colombia on Midsummer Eve, Miss Julia and her servant Juan have a forbidden encounter. As Juan tries to rise from his servile position, Miss Julia attempts to escape the bonds of her meaningless upper-class existence. The resulting power play of love, lust, and class struggle becomes a dangerous battle that veers violently out of control. Combining powerful physicality, naturalistic text, and live music, 'Miss Julia' is a clash of cultures which strives to make Strindberg’s text as relevant today as it was in the 19th century.

See it if You’re interested in a frightening history

Don't see it if You have trouble with accents

See it if You like theatre and good acting!

Don't see it if I can't see any reason why you wouldn't want to. This is an amazing show! I'd recommend it to anyone who loves theatre.

“Araiza's adaptation is remarkably faithful to the original…Montanini pushes against Strindberg's naturalism by having the actors perform ritual movements…At one point, Julie and Juan crawl toward each other like feral cats about to fight. Rather than deepening the story, it feels stagy and awkward. Montanini's blunt approach does help illuminate character, though…Minor missteps aside, ‘Miss Julia’ is an exciting and watchable 75 minutes."
Read more

“It stars an international cast: the indomitable, very talented and always compelling Australian actress Tina Mitchell…The play, a very physical movement piece, which sometimes skates the edges between dialogue and dance, builds slowly but steadily into a passionate love between Juan and Julia…A refreshing and unique entry into the New York theater landscape.”
Read more