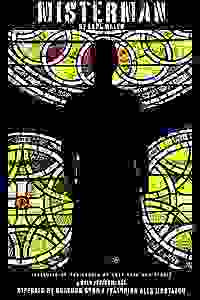 Enda Walsh's play "Misterman," written for a solo performer, is a study of one man’s descent into religious mania in small-town Ireland.

The play's action is set in 'an abandoned depot/dilapidated factory' in Inishfree, where loner Thomas Magill lives out his days, interacting with the people of the town via tape-recordings he has made of their voices, or by impersonating them himself.

He is convinced that it’s up to him to save the sinful place, but his deranged mental state leads to dire consequences for him and the town.

See it if extremely intense one man shows interest you. Thomas converses with his neighbors who exist mostly in his mind trying to save them from sin

Don't see it if you dislike heavy accents or plays that require your active mental interaction to track the events.

See it if to see a visceral, powerful solo piece by Walsh in which 1 spirited actor inhabits his sinful neighbors as he plunges into religious fervor.

Don't see it if ur looking for lighter fare than this off-beat, riveting, unrestrained piece that demands your rapt attention; u suffer from ecclesiophobia.

See it if you'd like to see a problematic production of a brilliant, infrequently performed script from one of the great living playwrights.

Don't see it if you do not want to sit through long stretches in which “dialog” is not so intelligible. Read more

See it if you follow Enda Walsh. Writing and depiction of characters is terrific.

Don't see it if you have a problem with thick accents. Difficult to understand some of the dialogue which made the show confusing.

See it if you admire Enda Walsh and are willing to view his dizzying portrayal of a man's dramatic breakdown without understanding everything he says.

Don't see it if you need to understand everything the marvelous solo actor says. As others have mentioned, his accent is thick and it can be frustrating.

See it if you enjoy one person shows; are interested in Enda Walsh's writing and/or Irish drama.

Don't see it if you don't like one person shows and/or dark dramas. Read more

See it if You're interested in an impressively acted one-man show regarding a mentally challenged man fixated on religion. Well worth your time.

Don't see it if You don't like solo shows or struggle with various Irish accents, or can't handle depictions of violent acts.

See it if ... you're an Enda Walsh completist. A committed one-man cast. Difficult accent. Hard to follow.