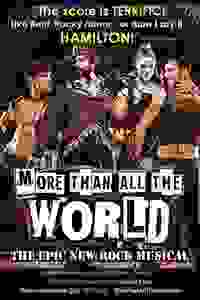 View in admin
More Than All the World
NYC: East Village
90
Score it Scored!

More Than All the World NYC Reviews and Tickets

'More than All the World' relates the true story of England's controversial King Edward II, whose reign was so riddled with scandal and unrest that it led to an all-out civil war, with one faction led by the monarch, and the other by his scorned wife, Isabella, The She-Wolf of France. The piece features a period-infused pop/rock score and a fast-paced, stylized libretto.

Don't see it if you don't like intelligible rock music, you're offended by sexual situations, or leather, feathers, & spandex give you the vapours Read more

See it if You want to see an amazing performance with an amazing cast. Great rock score meets Shakespere, meets Game of Thrones.

Don't see it if You are homophobic, don't like rock or are a "Broadway" snob. If you are the person who is fashionably late, you will sit the steps. Read more

See it if You like rock musicals. It's based on the life of Edward the second and tells his story with clarity and theatricality. Big band big cast.

Don't see it if Gay love offends you. This couldn't have been done any more tastefully. You could take your Mother and neither of you would be offended. Read more

See it if you like a glam-rock take on medieval British history, gay relationship drama in historical context; great performances, costumes, singing.

Don't see it if you don't like nearly 3-hour musicals, tales of medieval British monarchy, gay themes, costumes and styles at odds with time period.

See it if you enjoy well-done rock musicals. Great cast and direction.

Don't see it if you're offended by a gay-themed show. Read more

See it if If you love spunky exquisite productions & great intelligent music. If you love numerous breath-taking moments from various singer/actors!

Don't see it if You can't make it this week. It closes this weekend.

See it if You like well produced Off Broadway musicals with good music and good acting.

Don't see it if You don't like rock music musicals. You are looking for more elaborate staging.

See it if You can handle a gay gay sexual show

"Ambitious, sprawling, and unruly...The head spins with all we are asked to keep straight...Throughout, director Klein whips the 18-member company into a whirlwind of action, but varying acting styles and often highly stylized and eccentric British and French accents make for a shifting tone...Maybe we are meant to embrace the inconsistency of it all as part of the experience, but what unfortunately is nearly lost in the shuffle is the story."
Read more

"The score, a pleasing pastiche of styles ranging from Medieval to contemporary pop, is terrific. As the show unfolded, other notable crowd-pleasers sprang to mind, like 'Rent,' 'The Rocky Horror Show,' and—dare I say it?—'Hamilton.' Ransom has expertly distilled a vast amount of material, roughly spanning 30 years, into a cogent, absorbing narrative...This unpolished yet insightful 'More Than All the World' pulses with a raw, urgent intensity that is undeniable."
Read more