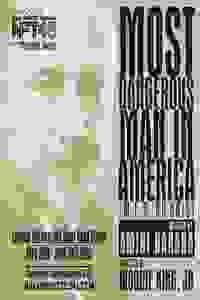 Castillo Theatre presents Amiri Baraka's dramatic reflection of the traumatic indictment of W.E.B. DuBois during the period of McCarthyism.

Scholar and activist W.E.B. Du Bois was indicted in 1951 by the U.S. federal government at the age of 82; he was attacked by the FBI as an "agent of a foreign power" for his advocacy of peace and his opposition to nuclear weapons. Between the opinions of the Harlem community, and the witnesses' testimony and the courtroom battles, the interior narrative of this series of events is made clear.

"Well-intentioned but ill-conceived, Woodie King Jr.'s heartfelt mounting of the late Amiri Baraka's final play is at best confusing, at worst, a bore...It feels more didactic than dramatic, with clunky set changes and dull characterizations. It's a shame since the Du Bois legacy deserves to be spotlighted, but this is an ineffectual memorial."
Read more

"The creakiest history lesson imaginable, a play that, in its laudable desire to instruct audiences, forgets to be a play at all...Sadly, with its halting structure, lack of drama, and dance sequences that come out of nowhere, 'Most Dangerous Man in America' isn't a stageworthy piece of writing...This production fails to honor either Du Bois or Baraka. The great play about Du Bois remains yet to be written."
Read more

"While a variety of viewpoints are voiced with humor and passion, the production feels jumpy and disjoined as blackouts separate short scenes and move props on and offstage through siding screens...One reason for the play’s choppy unevenness is the original lengthy 250 page script. King had this cut down to a concise 50 pages but while the show makes for an inspirational introduction, the brevity makes it far from an in depth study of a man whose call for peace is especially relevant today."
Read more

"The human scope of the play is stark and touching...The production is both prescient and vital, a confluence of terrific minds who will continue to live on and inspire us to fight without fear for justice, peace, and the right to think and speak freely."
Read more

"King aims for a 'filmic' production. That can be a risk in live theatre, a medium that is very much not film. For King, the risk pays off more than it misses the mark, but there are some notable drawbacks to the marriage of these two media...While not a perfect theatrical execution, this meaningful and historical world premiere will leave you personally moved and politically aware. It is uplifting, with deep, sturdy roots."
Read more