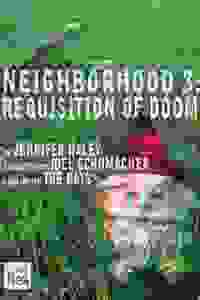 The Flea presents this suspenseful tale about a quiet cul-de-sac where no one can control the growing addiction to a new online game, and real life and virtual reality blur dangerously.

In a suburban subdivision with identical houses, parents find their teenagers addicted to an online horror video game. The game setting: a subdivision with identical houses. The goal: smash through an army of zombies to escape the neighborhood for good. Using a GPS map, the game allows teenagers to battle zombies in their own neighborhood. But as the line blurs between virtual and reality, both parents and players realize that fear has a life of its own. The live action game will be played around TriBeCa and the city in conjunction with the run as a part of The Flea’s continued effort to promote new types of engagement with their audience and community.

Don't see it if You're hoping to see a play about how technology is beginning to change out society. You care about good direction and staging.

See it if sci-fi theatre appeals to you, if video game culture is interesting to you, or you enjoy watching really strong ensembles of young actors.

Don't see it if you have Gnomophobia (yes, that is the fear of garden gnomes!)

Don't see it if If you're not open minded

Don't see it if You only like traditional plays

See it if You like challenging plays that make you question the line between realty and the virtual world.

Don't see it if you dislike ensemble shows that look in on many lives rather than following a single path.

See it if It was good.

Don't see it if Looking for fun

Don't see it if You're looking for a family friendly show

See it if You want to absorbed immediately into great writing

Don't see it if You're not a theatre fan!

"'Neighborhood 3,' never convincingly inhabits either of its principal settings — the green grassy world of the all-American suburbs or its creepy computer-rendered counterpart…This work still appears to take place on that flat, in-between zone of creativity commonly known as the drawing board…Ms. Haley pursues the idea through a series of vignettes that reiterate this central concept without ever truly developing it."
Read more

"'Neighborhood 3' is cheap-and-cheerful postcollege community theater; Jennifer Haley's script is a bagatelle, a brief and uncomplicated guignol about a video game gone wrong. It also feels long at 70 minutes...Basically, everybody here is learning, which I'd normally celebrate. But then that ticket price sticks in my craw. I guess it comes down to one question: Would you pay big money to watch a noob play Fallout 4? If so, boy, I've got the show for you."
Read more

"Jennifer Haley’s genuinely frightening script is toying with dark ideas about adolescent rage, virtual realities, and American conformity, which only grow more disquieting as the play lingers in the mind. (It’s hard not to make the grim connection between the play’s young killers and the real world’s Internet-indoctrinated teen-age mass murderers.) Joel Schumacher, directs the Flea’s house ensemble with black humor and a bare-bones aesthetic. The performances vary, but the horror is real."
Read more

"A thought-provoking piece undercut by its amateurish presentation...The play's provocative premise is clumsily handled in both the writing and staging. The profusion of characters and short, tenuously connected scenes makes it confusing to follow. What should have been a tautly horrific exercise is instead a rambling affair...Schumacher reveals his theatrical inexperience with this amateurish staging."
Read more

"The sum of the 70-minute evening is a double-edged sword: While Haley's text can be applauded for its ambition (even if it doesn't completely work), Schumacher's greenness stands in the way of its success...'Neighborhood 3' is also very obviously a early play in the career of a still-developing writer...Schumacher's direction gives the show a disjointed, low-stakes feeling...He guides the young cast members to performances that are merely fine."
Read more

"Such a scenario seems ripe for a production that will take full advantage of modern stage technology, but The Flea's mounting is low-budget affair played on a colorful, but static, unit set. Hollywood director Joel Schumacher, who has no theatre credits in his bio, helms a company of fifteen young non-union actors...Lackluster staging makes the actors seem crammed into the play, and the evening comes off looking like a college-level acting showcase."
Read more

"I appreciate that it can be difficult finding suitable scripts for The Bats, the Flea's resident troupe, especially since large-cast shows are needed to give everybody a chance to show their stuff. But it's still hard to understand why the company chose a play that is more or less indistinguishable from one of those cheapie teen-horror films...it isn't lively or funny enough for satire, and, taken on its own terms, is pretty trashy stuff. "
Read more

"As the lines between real life and the game start to blur, the logistics of how things can happen in both realities start to feel muddled...Strong direction might have helped smooth over the weaker elements, but Joel Schumacher isn't up to the task in his New York directing debut. He does seem like a smart choice for this suspenseful and cinematic piece, but it's unclear whether the tone he is going for is campy or serious. Like many of his movies, it could go either way."
Read more