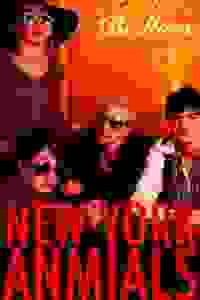 New Ohio & Bedlam present a world premiere that weaves together the comedic and tragic stories of 21 New Yorkers as their lives intersect during a rainy Manhattan day.

From an East Village diner to a Park Avenue penthouse, four actors playing twenty-one different characters deal with love, sex, money and impossible relationships. It's just another rainy day in New York City, played to a live new soundtrack by Burt Bacharach and Steven Sater, the lyricist for 'Spring Awakening.'

See it if you enjoy being in the middle of the action (NYA is performed thru-out the room's cabaret) and love Bacharach (well sung by Jo Lampert!)

Don't see it if you want insightful sketches about NYers. With millions of stories to choose from, how do you get such unilluminating material?

See it if you want to hear Jo Lampert's stunning vocals plus tunes by Bacharach and Sater. You want to witness Susannah Millonzi's star-making turn.

Don't see it if you need a strong, cohesive book.

"Their distinctive gifts never manage to merge into any satisfying whole...New York is known as a place where seeming mismatches make for exciting marriages. That hasn’t happened in this case, at least not yet. Though the show officially opened on Sunday night, it was still a work in progress...a little haphazard spontaneity might have been welcome in a show that, despite the melancholy bubbliness of the onstage band, consistently failed to register as fresh."
Read more

"The play itself seems to have aged poorly…The idea of cross-sectional commonality with far-fetched, coincidental links seems at least as old as the fax machines and Princess phones that show up frequently in the story...The individual tales are dated, too…And an odd, outdated air of condescension hangs over the entire proceedings…The songs are a wonderful relief but…the relationship between the few, neat songs and the strung-out play is strained and alienating."
Read more

"Lacking a cohesive theme, other than that life sucks, the dramatic portions seem to go on forever, with the performers playing so many roles it's difficult to keep track of the characters — not that you have any particular desire to. Thankfully, the original songs by Bacharach provide welcome compensation — even if they have only a vague connection to the dramatic material...No matter how much post-opening tinkering is done, 'New York Animals' looks headed for extinction."
Read more

"Four hard-working actors, ably assisted by a resourceful costumer and a nimble props master, make a mighty effort to play the 20-plus characters in 'New York Animals.' Steven Sater’s ambitious but disjointed play scores style points for being staged in a basement cabaret, a cool setting for Burt Bacharach songs that sound like no Bacharach songs you’ve ever heard. The sardonic lyrics by Sater suit the caustic tone of the music, but his sketchy vignettes do not a play make."
Read more

"While the show itself has some problems, the production has none at all. It’s a miracle of frugal ingenuity, the kind of mega-ingenious zero-budget staging that makes you wonder why Broadway even bothers…If 'New York Animals' sounds a bit awkward, that’s how it plays, and Mr. Sater’s sketches would profit much from being more pointed…But there’s already much to like about the show, starting with Mr. Tucker’s staging and the performances of the five actors."
Read more

"There are eight million stories in the naked city, and 'New York Animals' can't manage to decently dramatize even one of them…The songs are spiky with attitude and rife with regret, but they may as well be radio waves from Mars for all their relevance to the play that surrounds them…The characters constitute the thinnest of clichés...'New York Animals' is a cab ride to nowhere, a trip filled with talkative bores who can't stop advertising their uninteresting problems."
Read more

"'New York Animals' is ultimately disappointing, feeling like less than the sum of its parts...Despite the familiarity of the sketches and vignettes, the cast is excellent...'New York Animals' is an ambitious show...Unfortunately, the total product is an uneven blend of wonderful songs and minor dramatic scenes which attempt to create a portrait of a city that is long gone without having anything profound to say about the lives of its inhabitants."
Read more

"'New York Animals' celebrates this complex array of the sad, the lonely, the desperate, the frustrated and, occasionally, the successful or contented...Barsha and Lampert could perform these songs without the interspersed theater and it would be a magical night. But it’s the combination of Sater’s story and the performance of his and Bacharach’s songs that paint a wistful and nostalgic tableaux of an era that one might not have considered, until this telling, to be in the irretrievable past."
Read more

"Although an intriguing attempt, this production was not able to achieve the level of cohesiveness needed to make converging stories transform into one mosaic...There simply is not enough time to dive into the depth of twenty one characters in two hours, some of which is devoted to the inspiring musical numbers...For the present, it might be enough to observe these artists creating, developing, and performing a new work and, ironically, achieving a complex theatrical connection."
Read more

"A lot of Mr. Sater’s characters and situations feel a little too familiar. And while some are better rendered than others, nothing in the play is especially surprising or revelatory. Yet for all its shortcoming this organism has potential. The show is still developing and there is reason to be optimistic. Even as is, on the whole, 'New York Animals' is entertaining, especially for fans of Bedlam."
Read more

"It can be a fine line between archetype and stereotype, but Sater's characterizations tend to the latter while clearly intending the former...It's admirable that they avoided yoking everything to a contrived plot — but they also avoided drama more or less altogether...Sater and Bacharach paint a very monochromatic picture of a many-hued city...You'll probably see a more exotic sampling of Gotham on your walk back to the subway."
Read more