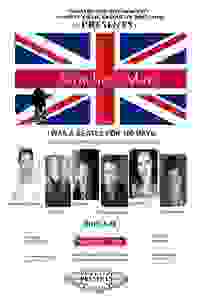 Theater for the New City presents a new play about a man hired as a double for one of The Beatles.

When The Beatles stopped performing at the height of their success, some fans became convinced it was because Paul McCartney had died in a car accident, and that the band tried to conceal his demise by hiring his double. ‘Nowhere Man,’ imagines a scenario where those erroneous rumors turned out to be true, with the band's arranger and road manager helping to orchestrate the ruse.

Don't see it if a good concept, well executed but they could have done a bit more with it.

See it if Want to be surprised by a creative concept realized in a well written & well acted play. U are a Beatles fan & liked their Nowhere Man song.

Don't see it if U are not interested in the Beatles or demand accuracy of events. I think even non Beatles fans will enjoy this refreshing idea for a play. Read more

Don't see it if you really have no desire to see any of what is mentioned above. Read more

"One hopes the playwright continues to develop this work as there is much to appreciate. The mingling of fact and fiction is generally credible until the machination starts to unravel, and the conceit is tantalizing. Nevertheless, the play misses several opportunities for elevating the farcical high jinks, as well as teasing out the trenchant satire about our obsession with celebrity...Many of these scenes simply peter out, and Solnik and Mejia have not sufficiently raised the stakes."
Read more