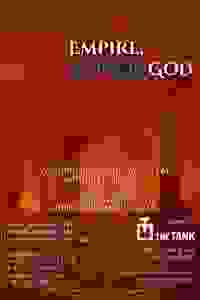 View in admin
One Empire, Under God
NYC: Midtown W
70
Score it Scored!

One Empire, Under God NYC Reviews and Tickets

A politically charged American drama about a technology-obsessed loner who rises to political power.

In One Empire, Under God, an emotionally disturbed young man incites an uprising against America’s openly atheist president. Armed with the power of digital media, he is able to subvert the democratic process and pave a path of victory for him and his descendants to rule for generations to come. But with great power, comes great backlash in this provocative critique of nationalism, imperialism, and religious extremism.

See it if You don’t mind a low budget but cleverly written show. Imagine if MSNBC and FoxNews birthed a political suspense show-thats what this is.

Don't see it if You can’t roll with some very low budget sets and some less than Tony worthy performances. The story is solid and the ambition is strong. Read more

76
Quirky, Quite a bit for a small stage, Relevant, Slow, Ambitious

See it if you'd enjoy a futuristic look at the political circumstances we are dealing with at this time. A dozen actors work hard in multiple roles.

Don't see it if you want a smooth polished production-here the actors are also the stage hands with many simple set changes.

See it if you are interested in the threat of religious extremism in the US, dangerous political movements and can tolerate weak direction and sets.

See it if You enjoy sci-fi on stage.

Don't see it if You want to experience a weak script, staging or directing with a lack of creativity.

See it if you want to see a play about a young man's rise to political power.

Don't see it if you want to see a play that has a well written script, not one that needs editing.

See it if If you like plays with a vast cast

Don't see it if You don't like political plays

Don't see it if you only support fully polished theater

See it if If you are open to looking at our current state of affairs and what could happen.

Don't see it if If you have no interest in looking at our current political situation and how power can take over our lives for ever...