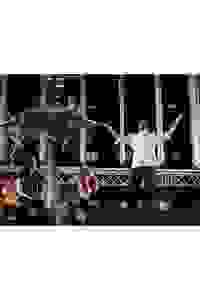 Bryant Park assumes the guise of wartime Venice as The Drilling Company (TDC) of Shakespeare in the Parking Lot present their free rendition of Shakespeare's immortal drama.

TDC's Othello, set in the crucible of a modern military action, examines the interplay of well-intentioned peacekeeping and progressive thinking butting painfully against the regressive backdrop of tribal instincts and backbiting social climbing. This take on the story of the Moorish prince and his doomed wife stars Emmanuel Elpenord as Othello, (previously in TDC productions of Twelfth Night, Measure for Measure, A Midsummer Night's Dream, As You Like It), David Marantz as Iago (The Merry Wives of Windsor, Merchant of Venice), Liz Livingston as Desdemona (A Midsummer Night's Dream, Hamlet) and a cast that includes Karla Hendrick, Jack Sochet, Brad Frost, David Sitler, Remy Souchon, Jacob Lesh, Hayley Simmonds and Kyle Maxwell.

See it if You want a good version of Shakespeare. They are mostly sticking to the classic script but with a modern twist. Great job.

Don't see it if You do not like outdoor theatre.

See it if a very respectable production, acting ranges from adequate to excellent, great staging. Remarkably clear delivery from all the actors.

Don't see it if There is barely a line or scene changed, which I personally appreciated a lot but don't expect any heavy modernization if that's your thing. Read more

See it if You can't get tickets to Shakespeare in Central Park or want to introduce young people to theatre and are afraid they can't sit still.

Don't see it if You don't like being outside or you mind if people are moving around you (even as the performance is going on, the space is used as a park).