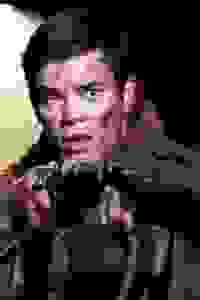 Our Friends The Enemy NYC Reviews and Tickets

Theatre Row presents the London acclaimed story of the 1914 Christmas Truce about war and for a brief moment, peace.

The Western Front, Christmas 1914. British and German soldiers stop their fighting, emerge from their trenches and meet between the firing lines. The events that follow are the most astounding stories of the Great War told through the eyes of one soldier. Private James Boyce takes us on a magical, haunting journey through the remarkable Christmas Truce.

See it if Cool

Don't see it if You don't want to

See it if Very exciting

"Using a cheery working-class accent for this everyman and playing other characters, the magnetic Alex Gwyther holds forth for nearly an hour during this haunting dramatization...Director Tom O’Brien’s efforts are an exemplary work of stagecraft...All of the production elements are precisely coordinated resulting in striking imagery and mood...it is also a superior work showcasing the wondrous talents of Alex Gwyther adds considerably to its virtues."
Read more

"Brutalities of war, and the power of brotherhood and Christmas spirit to achieve peace, are given vivid life in this moving one-man show... As Gwyther jumps from person to person, he’s guided by the effective lighting and sound that transport the action from the quiet moments to where the sky is lit up from bombs...It’s not a long show, but it packs a thoughtful and emotional punch...Gwyther and O’Brien have crafted a show that, 100 years later, feels very relevant."
Read more

"The play’s mainly lighthearted culmination is gratifying to watch and well earned – Gwyther conveys the intensely palpable relief of the soldiers, come Christmas day, when both sides put down their arms and exchanged cigarettes, stories, and in some cases home addresses...Gwyther slips in and out of the various characters with immense skill, bringing to life each character with clarity and specificity."
Read more

"Alex Gwyther’s masterful recasting of the long-ago tale is haunting and beautiful...The waste and wantonness of war is the headline here. What makes it a Christmas tale to be savored is the evidence of humanity unleashed, however briefly, against all odds."
Read more

"The story is profoundly powerful, but its heartbeat rests in incidental moments, not in a cumulatively engrossing drama; instead, an elegiac mood takes precedence over dramatic development. Sincere as are Mr. Gwyther’s intentions, they never coalesce into an emotional fireball. His soft-voiced delivery, except for a few moments of heightened feeling, has a monotonous sameness that, even for a performance only 55 minutes long, borders on the tedious."
Read more

"Alex Gwyther, is a wonderful actor and writer and makes us know each of these characters. His performance is worth watching and if you do not know this amazing piece of history it will lighten your heart this holiday season."
Read more

"Straightforwardly directed, the narrative unfolds in just 55 minutes. The story rolls along in predictable fashion but Gwyther is charming and the audience at the performance I attended sat rapt."
Read more

"There is a great stage play or film to be made of this; those that I have seen don’t quite have the grandeur that I believe lies in the raw material. 'Our Friends the Enemy' doesn’t try to be a multi-million dollar telling of the story. Gwyther goes a different way — showing the world through the eyes of a single actor...It is a choice I might not have made, but this is a play I wish I had written. It is definitely a performance to be seen."
Read more

"While one might wonder which side Gwyther thinks he fought on, as he expresses in the poignant and, at times, hilarious show, it doesn’t matter...Gwyther has thoroughly researched the truce, even staying in a trench for the experience, and vividly brings to life the fears and hopes of the boys forced to become men."
Read more

"It's a confident and ably-performed piece. As a spoken word performer, Gwyther seems to have little trouble in affably telling the story of a series of front line soldiers across the trench lines that fateful winter. While not the most unusual of ideas, it's still an even-toned and inventive take on the material."
Read more

"A tremendous tale of compassion and peace was milked dry in this tedious one-man-show...A couple of sparkling moments were unfortunately overshadowed by an unimaginative and predictable ending, and the relentless military metaphors felt contrived and patronising...A little more imagination and fuller commitment to the emotions of an otherwise enchanting tale could transform this piece into something far more provocative."
Read more

"The performance by Gwyther is also tremendous and well directed. There is a charming youthfulness which fits the naivete of the characters and justifies the sense of optimism in a very bleak situation. The characterisation and voices are clear and support the physical side of the performance well...If one of the purposes of theatre is to transport the audience into a different world, this is a perfect example of it."
Read more

"Pros: Fantastic design coupled with a bright and enthusiastic performance based on a fascinating historical moment...Cons: The plot didn’t have much of an arc and despite an engaging performance, the script might have been better suited as a short story or full-cast production rather than a solo piece...Our Verdict: There were many great elements at play here but ultimately the dramatic presentation lacks effectiveness."
Read more

"Pros: A strong performance and script from Gwyther, even-handed direction from O’Brien, and a timeless, deeply human message...Cons: The diffusion of narrative focus devalues the stories of the two characters who underpin the text; several passages come close to being a cliché and the mild allusions to the architects of war might have carried more venom...Our Verdict: A combative one-man piece with a lot to offer."
Read more

"In 'Our Friends, The Enemy,' Mr. Gwyther has found a way to give a familiar story a new perspective. One that acknowledges the significance of the Christmas truce as an event which showed that, in the midst of war and death, there is always the desire for peace and life. It is a show well worth seeing, as it is a lesson well worth remembering."
Read more