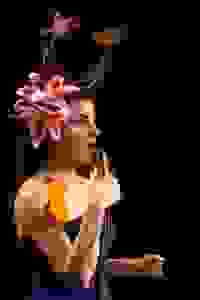 One summer night in a small town sometime in the 20th century, a teenage girl named Charity loses herself in a cave. Or is it a nightclub? A mysterious torch singer croons as Charity becomes a permanent caterpillar, lost in her own voraciousness. Performed by The Drunkard's Wife, a no-wave mountain music band/theater troupe.

“If the goal of this performance was to present a wonderfully twisted, abstract piece of theater, it did so at the cost of a compelling conclusion...I wasn’t really sure what I was supposed to walk away with. However, it’s worth a shot for those into experimental and postmodern theater...With each scene more unpredictable than the last and littered with titillating detail, it definitely makes for an interesting and thought-provoking night.”
Read more

“This is horror at its most atmospheric and cerebral...Sherwood’s twisted, unpredictable vision may be equal parts engaging and confounding to those unfamiliar with this genre...On the outside, ‘Permanent Caterpillar’ unfolds like a teenage soap opera created by a demon high on LSD. At its core, however, Sherwood’s piece is a thoughtfully-crafted metaphor for the trauma of teenage girlhood.”
Read more