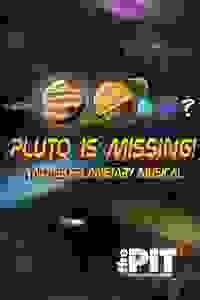 The Peoples Improv Theater presents a family-friendly musical comedy that blends music, puppets, and fantasy with real science and space exploration history, in its story of the demoted planet Pluto's quest of self-discovery.

The year is 2006, and there's been a big shake up in the Milky Way: Pluto has been reclassified as a dwarf planet! When news of its demotion reaches the small planetoid, Pluto leaves the Solar System on a cosmic journey meeting groovy satellites, fun-loving gas giants, and a galaxy of other celestial oddballs on its quest to become a planet again. Best for ages 5 to 10.

See it if your kids don’t need a lot of bells and whistles in their theater-going experience.

Don't see it if you have young kids who are easily bored. The 6-9 year-olds in attendance seemed to like it, but I’m not sure about kids outside that range.

See it if you have a child or bring a child (or children) between 2 1/2 and 7 with any interest in science.

Don't see it if you don't have young children to bring or you don't like the unevenness of improv.