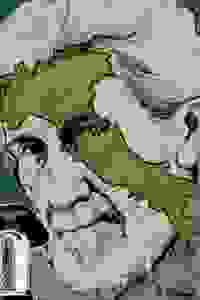 Drama Desk and multiple Emmy Award-winning actor Christopher Lloyd stars as Ezra Pound in this drama about one of the 20th century’s most divisive and profoundly influential literary figures.

Fascist, prisoner, immigrant, and struggling with mental illness, poet Ezra Pound wielded words as powerful weapons. The play imagines the final days of Pound's commitment at St. Elizabeth’s Psychiatric Hospital. The 73-year-old Pound finds himself confronted by Ann Polley, a young psychiatrist who aspires to help the man who has been labeled “incurable.” Pound dismisses her, as he has done with previous psychiatrists, but when he learns of his imminent release, he experiences an inexplicable dread that drives him to Ann for help.

See it if If you like Christopher lloyd. He stands well out in this cast. If you like the poet Ezra Pound.

Don't see it if If you dont like the subject matter or Pound. Biased and cursing throughout.

See it if Facing treason charges, the bigoted poet is apprehensive to leave hospital; relies on Jewish therapist to save him from himself. Fine cast.

Don't see it if No poetry. Racial slurs. At both performances, the great Lloyd(that voice!) was on book, throwing off the cast, the rhythm, and missing cues Read more

See it if you want to see a virtuosic performance by Christopher Lloyd supported by good cast. This may have suffered in previews, but it's great now

Don't see it if you're not interested in history or heavy subject matter. A lot of the dialogue is unpleasant to hear, but comes across authentic

See it if you'll do your homework on Pound: why is he @ this psychiatric ward in DC for 12yrs? Interesting life, mind, battles w/personal demons, etc.

Don't see it if you don't do the research. If you already know about him, you won't learn anything new (but you'll get to see Christopher Lloyd LIVE). Read more

See it if A profound, well acted play. Hard to follow at times.

See it if you're curious about Ezra Pound. I knew nothing about him, and was quite intrigued.

Don't see it if you are expecting a 'finished' piece. Unfortunately, this appears to be a work in progress. Read more

Don't see it if you prefer light stories

See it if You are interested in Ezra Pound. This is well written. Looking around the audience not a head moving

Don't see it if You do not like to hear the word kike. Jew. Lloyd was reading from script. No humor at all.

“Christopher Lloyd does not disappoint: his presence is arresting, and his masterful yet effortless use of language brings to life Pound’s bullheaded stubbornness and raging passion...Abbruzzese’s performance as the psychiatrist is just as captivating...Unfortunately, without Lloyd and Abbruzzese’s talents, O’Leary’s play comes up a bit short. I had a hard time investing in the story because I didn’t care enough about the characters’ objectives.”
Read more

"'Pound' is dismissive, jocular, arrogant, and entertaining by turns. He has made a world for himself out of his hospital confines...The heart of the play is in the conversations that take place between the young psychiatrist and her renowned patient...These conversations bring up age-old debates going back to the salons of the renaissance designed around the importance of art that then ask what is more important than art...The acting is excellent throughout."
Read more